Telecom regulator Trai's much-awaited recommendations on 5G spectrum pricing and other modalities will come out in the next 7-10 days, a senior official said on Tuesday. 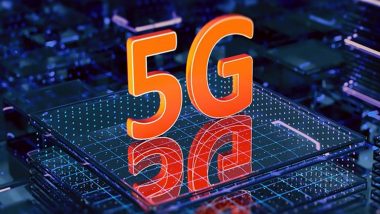 New Delhi, Mar 29: Telecom regulator Trai's much-awaited recommendations on 5G spectrum pricing and other modalities will come out in the next 7-10 days, a senior official said on Tuesday.

"We are in the final stages, and will come out with the recommendations shortly in 7-10 days," Raghunandan said. 5G Trials Get Approval From Telecom Department, Telcos to Start 5G Trials in Different Locations Across India.

Trai's views on spectrum pricing and other nuances are crucial as it will set the pace for the auctions and subsequent rollout of the fifth-generation services that will usher in ultra-high-speed and spawn new-age services and business models.

The telecom industry was expecting the regulator's recommendations to come by March-end.

The telecom regulator, in November-end last year, had released a detailed consultation paper to discuss threadbare the modalities for auction of spectrum across multiple bands, including pricing, quantum and other conditions -- preparing the groundwork for upcoming 5G auctions.

Trai's comprehensive consultation paper runs into 207 pages and throws up 74 questions for industry-wide discussion, touching on crucial aspects like valuation and reserve price of 5G spectrum, quantum of the spectrum, block size, eligibility conditions for participation in the auction, roll-out obligations, spectrum cap, and surrender of the spectrum.

The last round of spectrum auctions, held in March 2021, had raked-in winning bids of over Rs 77,800 crore for 855.6 MHz of spectrum. But, nearly 63 per cent of the total spectrum remained unsold.

As the country gears up for the mega auction, the industry players have been making an aggressive pitch for lowering spectrum pricing. Telecom operator Bharti Airtel's Chief Technology Officer (CTO) Randeep Sekhon had recently made an emphatic appeal for "affordable" pricing of 5G radiowaves, saying pricing "will play a very important role".

"If operators are made to buy very expensive spectrum, naturally their cash flows will be limited, they will have to pay. But if it is very reasonable, then it is very possible that the operator will bring the same money on increasing footprint faster," Sekhon had said last week.