Arctic Fires FAQs: 'Are There Wildfires in the Arctic?' To 'What Caused the Siberian Fires?' Most Asked Questions on Fire in the Arctic Answered 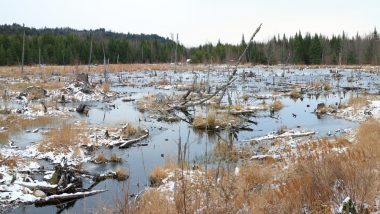 The Arctic Circle, known for its chilly weather is in recent times experiencing high temperature. In June, the temperature soared to a record average amid heatwave causing some of the worst wildfires. An estimated 3.4 million acres are burning in the Arctic, according to Russia's forest fire agency. By the end of June, around 1.1 million acres were burnt. NASA satellite images revealed fires across the landscape billowing clouds of smoke which scientists say will "catch a ride on the jet stream to other areas of the globe". In June, intense wildfires in the Arctic released polluting gases into the Earth’s atmosphere than in 18 years of data collection, European scientists said in a report Tuesday. As the issue caused by global warming continues, there are many questions about the wildfires in the Arctic. From 'What Is Burning in the Arctic?' to 'Is the Arctic Still Burning?' we bring to you some of the Frequently Asked Questions (FAQs) about it. Arctic Circle Records Highest Temperature Ever at 38 Degrees Celsius/100 Degrees Fahrenheit in Siberian Town Verkhoyansk.

The Arctic is warming at least two and a half times faster than the global average rate. Average temperatures in the region were more than five degrees Celsius above normal. They were more than a degree higher than the two previous warmest Junes - in 2018 and 2019 - according to the data. World’s Coldest Village Oymyakon in Siberia Records -62 Degrees and People’s Eyelashes are Freezing!

Are There Wildfires in the Arctic?

Seasonal wildfires are common in the Arctic but at times some refuse to die. They are called "zombie fire" or "holdover fires" when the rich organic material beneath the surface beneath the ice begins to get smouldered. In the recent past, there have been multiple wildfires affecting the frozen land's geography.

What Caused the Siberian Fires?

The area has been experiencing a heatwave since quite some time now. And now the majority of the blazes were caused by lightning strikes, according to the Alaska Interagency Coordination Center.

What Is Burning in the Arctic?

Wildfires are burning trees are other things in the ecosystems rising temperatures in the region.

Is the Arctic Still Burning?

Every now and then wildfires erupt in the region coupled with a heatwave and warming temperatures. Siberia known for being frozen is now recording temperatures upto 38 degrees. Antarctica Loses Another Big Chunk of Ice; Here 5 Major Ways In Which Glacier Melting Can Affect The Planet.

Does Anyone Live in the Arctic?

In total, only about four million people live in the Arctic worldwide. In most countries, indigenous people make up a minority of the Arctic population. Archaeologists and anthropologists believe that people have lived in the Arctic for as much as twenty thousand years.

Siberia is a vast region of Russia and northern Kazakhstan. Siberia extends from the Ural Mountains in the west to the Pacific Ocean in the east and southward from the Arctic Ocean to the hills of north-central Kazakhstan and the borders of Mongolia and China. The Impact of Wildfires and Climate Change on Indoor Air Quality.

The wildfires do no just have an impact on Earth, but also release harmful pollutants and toxic gases into the atmosphere. Thawing of permafrost in the Arctic could awaken microbes that have laid dormant before humans took over the globe. According to the Russian forestry agency, 246 fires covering more than 1,400 sq km (540 sq miles) had been recorded in the region as of July 6. Scientists and researchers have at multiple times said that more extreme weather events will cause intense heatwaves and severe storms in the future.

(The above story first appeared on LatestLY on Jul 09, 2020 01:51 PM IST. For more news and updates on politics, world, sports, entertainment and lifestyle, log on to our website latestly.com).