After the launch, the RISAT-2BR1 satellite will be placed into an orbit of 576 km. The satellite can look through the clouds and take sharp pictures. 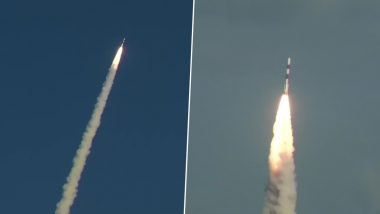 Sriharikota, December 11: The Indian Space Research Organisation (ISRO) on Wednesday successfully launched the RISAT-2BR1 and nine customer satellites at 3.25 pm from the Satish Dhawan Space Centre (SDSC) SHAR at Sriharikota. The RISAT-2BR1 is a radar imaging earth observation satellite weighing about 628 kg. All the satellites were launched by the Polar Satellite Launch Vehicle (PSLV) rocket. The launch mission is expected to conclude in about 21 minutes when the last of the customer satellites will be put into orbit.

The 44.4 metre tall, rocket broke free of the first launch pad and started its upward one way journey carrying the 628 kg RISAT-2BR1 is an advanced radar imaging earth observation satellite. After the launch, the RISAT-2BR1 satellite will be placed into an orbit of 576 km. The satellite can look through the clouds and take sharp pictures.

According to ISRO, the satellite will be used for agriculture, forestry and disaster management activities, it remains silent on RISAT-2BR1s strategic utility. The space agency said that just over 16 minutes into its flight, the rocket will sling RISAT-2BR1 and a minute later the first of the nine customer satellites will be ejected.

(The above story first appeared on LatestLY on Dec 11, 2019 03:53 PM IST. For more news and updates on politics, world, sports, entertainment and lifestyle, log on to our website latestly.com).