Partial Solar Eclipse in January 2019: Know Date, Timings, Where and How to Watch The Celestial Event of Surya Grahan

The first partial solar eclipse of the year will take place on January 6. 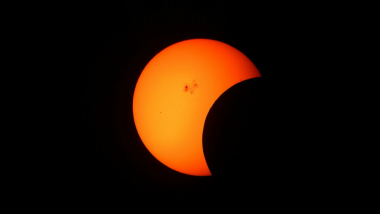 Astronomy enthusiasts, the year of 2019 is starting on a good note or rather celestial occurrences. The first month of January itself will see two eclipses- a partial solar eclipse and a total lunar eclipse. So those who love watching the shadow game being reflected up in the sky, it is a good start. The first partial solar eclipse of the year will take place on January 6. During a partial solar eclipse, the moon passes from the front of the sun, causing a part of the source of light to be under its shadow. This partial solar eclipse will be visible in parts of North-East Asia and the Pacific Ocean, thus the Indian subcontinent will not be able to see the celestial event of Surya Grahan. Super Blood Wolf Moon 2019 Date and Timings: Know About The Rare Astronomical Phenomenon Occurring in January.

What is Partial Solar Eclipse?

An eclipse takes places when three objects- the sun, moon and earth come in a line. During a partial solar eclipse, all the three objects are not in a perfectly straight line. But the moon will block the sun's path and for the people on earth, it will appear like a shadow over the sun. Certain parts of the sun will be covered by the moon.

Places From Where Partial Solar Eclipse Will be Visible

The partial solar eclipse of January 6 will not be visible from India. However, people from parts of Russia, northeast China, Japan, Mongolia will be able to see the moon covering part of the sun. The US minor outlying islands can also catch on this event.

How to Watch Solar Eclipse?

It is always advised to never look at the sun with the naked eyes, even in times of eclipse. There is a special pair of eclipse glasses that are available, to observe such phenomena. If you are observing through a telescope, one must use solar filters. It is important to adequately protect for your eyes while watching the solar eclipse.

(The above story first appeared on LatestLY on Jan 03, 2019 04:48 PM IST. For more news and updates on politics, world, sports, entertainment and lifestyle, log on to our website latestly.com).