Twitter Introduces Clubhouse App-Like Feature ‘Spaces’ on Android, What Is It? How To Use on Your Smartphone

Twitter, the microblogging and social networking service has rolled out Clubhouse app-like feature called 'Spaces'. It is Twitter's new audio chat room feature that allows users to join or host voice chats on the platform. 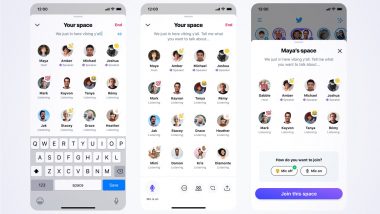 Twitter, the microblogging and social networking service has rolled out Clubhouse app-like feature called 'Spaces'. It is Twitter's new audio chat room feature that allows users to join or host voice chats on the platform. Twitter began testing this feature in December last year, and by early January 2021, it was only available in a small feedback group. With this feature, the company aims at striking voice-based conversation on the platform. Twitter Testing Audio Chat Tool ‘Spaces’ on Android in India.

Android folks, our beta is growing! starting today you will be able to join and talk in any Space. SOON you’ll be able to create your own but we’re still working out some things. keep your 👀 out for live Spaces above your home tl

Users can create a 'Space' and their followers can join to participate in the conversation. It is important to note that only 10 people can speak in a Space at a time. Twitter Spaces feature was available only on iOS but now the feature is being rolled out to Android as well. As this is a new feature, some Android users might not be able to create their rooms or 'Space' just yet. Here's how to use Twitter Spaces.

1. Space can begin by long pressing on the Compose button on Twitter and tapping on the 'Spaces' icon on the extreme left.

2. Another way to start a Space is by tapping on your profile image in Fleets, scrolling to the extreme right and select Spaces

3. Up to 10 users can be invited to a Space and you can choose who can join in with other speaking users. You can choose from options including 'Everyone', 'People You Follow' or 'Only People You Invite'.

Another important note is that users who have turned on the 'Protected Tweets' feature in their account will not be able to create Spaces, but they can join and speak in other user's Space.

(The above story first appeared on LatestLY on Mar 03, 2021 05:44 PM IST. For more news and updates on politics, world, sports, entertainment and lifestyle, log on to our website latestly.com).