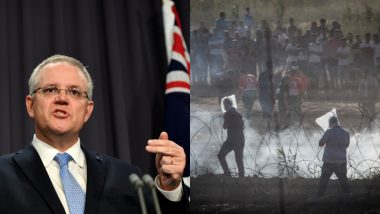 Tel Aviv, December 15: Australian Prime Minister Scott Morrison on Saturday said that his country recognises West Jerusalem as the capital of Israel. However, he opined that they would not move their embassy from Tel Aviv until a peace settlement is reached.

With this, the Australian Premier also announced that his government would recognise East Jerusalem as the capital of Palestine after a settlement has been reached on a two-state motion, reports the Guardian. The PM announced his decision during his speech to the Sydney Institute on Saturday. Israeli Forces Kill Palestinian Suspected over West Bank Shooting.

Announcing the decision, Morrison said, as reported by the daily, “The Australian government has decided that Australia now recognises West Jerusalem – as the seat of the Knesset [Israel’s parliament] and many of the institutions of government – is the capital of Israel. And we look forward to moving our embassy to West Jerusalem when practical, in support of, and after, final-status determination.”

According to the PM, a two-state solution remains the only viable solution to resolve the dispute between Israel and Palestine, and none of them views the other as a genuine partner for peace. Though the Australian government has delayed the relocation of its controversial embassy relocation, for the initial period, Morrison is planning to establish a defence and trade office in Jerusalem and would start looking for an embassy site soon, says the daily.

Condemning the move, opposition leader Bill Shorten accused the Morrison government of putting ‘political interest ahead of national interest’ and referred this as a ‘humiliating backdown’ from a rushed by-election announcement.

It is to be known that last week Palestinian leaders were lobbying Arab and other Muslim countries to withdraw their ambassadors from Canberra for Australia’s intentions of setting up an embassy in Jerusalem. Also, the Palestinian leaders had requested their neighbours to drop exports from Australia.

Earlier in May this year, United States of America has moved its embassy from Tel Aviv to Jerusalem, which was not only condemned by its allies, but Palestinian leaders and the Muslim world. Soon after the move, a massive protest in Gaza took place, and 58 Palestinians die. After the US President’s – Donald Trump – decision to move its embassy in Jerusalem in December 2017 was made, Israel has been pushing hard to persuade other countries to follow, and Australia became one of the first few.

(The above story first appeared on LatestLY on Dec 15, 2018 09:04 AM IST. For more news and updates on politics, world, sports, entertainment and lifestyle, log on to our website latestly.com).