'Doomsday Clock' Strikes Two Minutes to Midnight, First Time Since 1953: What it Means and Why it Matters 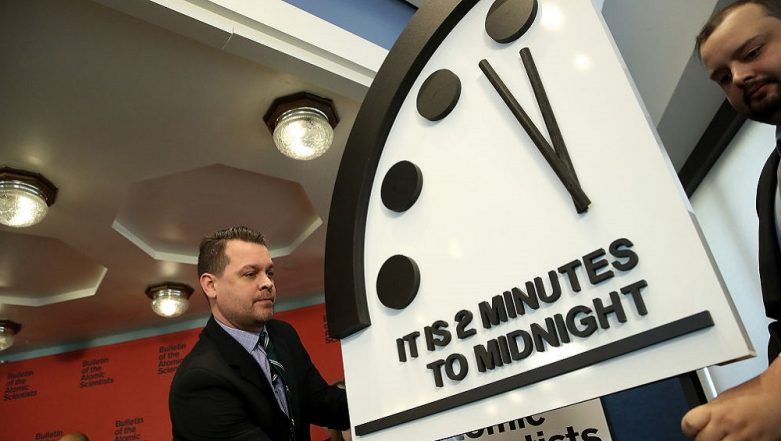 New Delhi, Jan 26: The 'Doomsday Clock', a symbolic watch that represents the proximity of mankind towards a man-made global catastrophe, moved closer to the 'midnight' -- reaching which could spell the end of the world. It is for the first time since 1953 -- at the height of Cold War -- that the clock's timing has reached at this alarming level.

The clock managers -- members of the Bulletin of Atomic Scientists -- cited the rise in tension among nuclear-armed nations, surge in nationalist tendencies, United States' reluctance to assume multi-lateral leadership and friction between US and Russia as some of the major reasons for them to move the clock from two-and-a-half minute to two minutes close to midnight.

What is the Doomsday Clock?

- The Doomsday Clock was first set up in 1947 to gauge the level of threat the world faces due to nuclear armaments.

- The symbolic clock has been managed by the Bulletin of Atomic Scientists, the technocratic group closely linked with the Manhattan Group, a research and development unit which produced the first nuclear weapons of the world.

- Unlike the real clock, it moves in both clockwise and anticlockwise directions. For instance, in 1953, the Bulletin of Atomic Scientists had moved the clock to two minutes close to midnight. This meant that the world was closest towards its annihilation due to man-made causes.

- However, with the weakening of the erstwhile USSR, and the tensions defusing round the world, the clock gradually moved back, striking 17 minutes to midnight in 1991.

- The calculation of time is done on the basis of following threats posed before the world: Nuclear warfare, bioterrorism, biosecurity, cyber warfare and climate change.

Although the Doomsday Clock does not presents statistics and data to validate its prediction about the future of the world, it continues to serve as a credible instrument to gauge geopolitical tensions over the past seven decades.

At the height of cold war, when the clock showed as alarming levels as it shows now, the world was plunged into an intense arms race, which also led to the proxy wars between the US and the USSR in various parts of the third world.

With the fall of the Soviet Union, and the subsequent end to the Cold War, the threat level came drastically down.

When the clock showed 17 minutes to midnight, in 1991, it ushered into an era of global economic resurgence, with the economies of both -- the developed and the developing world moving into a positive trajectory.

Positive expenditure was also witnessed in various nations, where the government began investing more in education, healthcare and public welfare, as compared to increasing its military arsenal.