The death toll in Japan’s earthquake has risen to eight. The earthquake measuring 6.6 on the Richter scale, followed by a number of aftershocks, rocked Japan's Hokkaido prefecture on Thursday 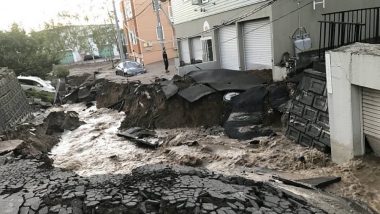 Tokyo, September 6: The death toll in Japan’s earthquake has risen to eight. The earthquake measuring 6.6 on the Richter scale, followed by a number of aftershocks, rocked Japan's Hokkaido prefecture on Thursday, leaving multiple houses buried by landslides. Rescue work is underway to search for the missing. Some homes in the quake-stricken areas collapsed.

According to the Japan Meteorological Agency (JMA), the epicentre of the earthquake was at a latitude of 42.7 degrees north and a longitude of 142.0 degrees east, and at a depth of 40 km. Dozens of aftershocks were felt after the earthquake, including one with a magnitude of 5.4. According to a public broadcaster NHK, 120 people had also been injured in the quake.

A huge earthquake hit the north part of Japan (Hokkaido）the day after #TyphoonJebi destroyed middle part of Japan. What the hell is going on in Japan..... pic.twitter.com/ttPArB3EBy

According to reports, the local nuclear power plants have also been shut down after the tremors. No damage has been reported to critical facilities. Hokkaido Electric Power Co conducted an emergency shutdown of all its fossil fuel-fired power plants in the island.

The strongest storm, Jebi has also hit Japan in 25 years. At least 10 people have reported being killed in the storm. Kansai airport, a major transport hub serving Osaka, Kobe and Kyoto, was cut off. About 3,000 passengers also stranded for more than 18 hours in terminals without power.

(The above story first appeared on LatestLY on Sep 06, 2018 11:24 AM IST. For more news and updates on politics, world, sports, entertainment and lifestyle, log on to our website latestly.com).