While referring to Pakistan Prime Minister Imran Khans statement to gather 100,000 supporters outside the Parliament House on Sunday when voting will be held on the no-confidence move 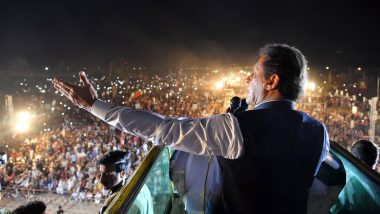 Islamabad, April 2: While referring to Pakistan Prime Minister Imran Khans statement to gather 100,000 supporters outside the Parliament House on Sunday when voting will be held on the no-confidence move, Leader of Opposition in the National Assembly Shehbaz Sharif has called on the Islamabad Capital Territory (ICT) administration to ensure the security of every parliamentarian irrespective of party affiliation, Dawn reported.

On the other hand, Islamabad's security level was being raised to red while police commandos had been provided to Sharif in view of the changing situation. Pakistan PM Imran Khan Faces Flak for Praising PM Narendra Modi’s Foreign Policy.

Meanwhile, a dissident MNA from Pakistan Tehreek-i-Insaf (PTI) has accused Khyber Pakhtunkhwa Chief Minister Mahmood Khan of creating an "Afghanistan-like situation" after an audio of the chief minister got leaked in which he can be heard directing cabinet members and party MPAs to stage protest and carry photographs of those PTI parliamentarians who had switched sides, Dawn reported.

In a letter addressed to the chief commissioner, deputy commissioner (DC) and inspector general of police (IGP) Islamabad, Sharif sought complete security for all MNAs who would be voting on Sunday.

"It is your constitutional and legal duty and responsibility to ensure full security/protection to all MNAs, irrespective of political affiliation, when they attend the National Assembly for exercising their right to vote on the resolution for a vote of no-confidence against the Prime Minister under Article 95(1) of the Constitution of the Islamic Republic of Pakistan," Sharif wrote.

(The above story first appeared on LatestLY on Apr 02, 2022 03:00 PM IST. For more news and updates on politics, world, sports, entertainment and lifestyle, log on to our website latestly.com).