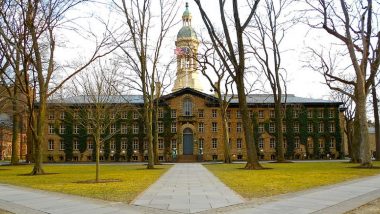 Washington, June 27: The prestigious Princeton University announced an unprecedented decision to remove the name of a former American president attached to one of its educational wings. The varsity board, which met on Saturday, announced that the School of Public and International Affairs would no longer carry the prefix of 'Woodrow Wilson'. Italian Journalist Indro Montanelli's Statue Defaced, Tagged With Words 'Racist', 'Rapist'.

The building, based inside the campus of Princeton University, would now be known as Princeton School of Public and International Affairs. The decision comes amidst the raging Black Lives Matter protests across the United States, with the demonstrators seeking derecognition of all historical figures who promoted racism.

The Princeton University, in a statement issued after the meeting of senior management officials, said late former president Wilson's views which leaned towards "racism" were taken cognisance of, and it was decided to strip the building dedicated to public and international studies from his name.

"We have taken this extraordinary step because we believe that Wilson's racist thinking and policies make him an inappropriate namesake for a school whose scholars, students, and alumni must be firmly committed to combating the scourge of racism in all its forms," the statement read.

Princeton University is one the leading universities of the US, based in Princeton town of New Jersey. The University was built in 1746, and is one among the nine varsities whose foundation stone was laid during the colonial British rule in America. It is also the fourth oldest institution of higher learning in the US.

(The above story first appeared on LatestLY on Jun 28, 2020 12:08 AM IST. For more news and updates on politics, world, sports, entertainment and lifestyle, log on to our website latestly.com).