Ramadan 2021: Bahrain To Send Those Eating or Drinking in Public During Fasting Hours in Jail for Up to One Year

Those found eating in public during the fasting hours of the Ramadan month will face strict punishment in Bahrain, according to local media reports. 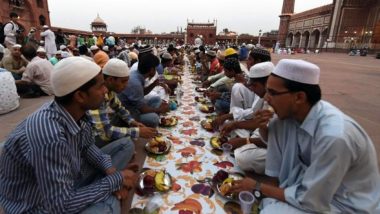 Manama, April 23: Those found eating in public during the fasting hours of the Ramadan month will face strict punishment in Bahrain, according to local media reports. Bahrain will send the violators in jail for up to one year and impose hefty fine on them. Dawn-to-dusk fasting in Ramadan is mandatory for all Muslims except for those who are sick or pregnant women. Eating in public during the fasting hours is considered offensive by many. Ramadan: What is Permitted And Not Allowed For Muslims?

Those who publicly consume food during Ramadan fasting hours will be penalised under articles 309 and 310 of the Bahrain's Penal Code, reports said. Article 309 criminalises speaking loudly, eating or drinking and smiking in public during the fasting hours. It means, in addition to consumption of food in public, speaking loudly can also attract imprisonment or hefty fine. Ramadan 2021: Uyghur Muslims from China's Xinjiang Refrain Fasting During The Holy Month, Fearful of Being Branded as 'Extremist'.

If a person is booked under articles 309 and 310, s/he faces jail term up to one year or a fine not exceeding $265 or 100 Bahraini dinars. According to a statement released by the police, the law applies to Muslims and non-Muslims, and residents, citizens and visitors.

Fasting in Ramadan is one of the five pillars of Islam. During Ramadan, Muslims abstain from all types of food and drink from dawn to sunset. They consume pre-dawn meal, called Sehri, and break their fast with Iftar (evening meal) after sundown.

(The above story first appeared on LatestLY on Apr 23, 2021 01:00 PM IST. For more news and updates on politics, world, sports, entertainment and lifestyle, log on to our website latestly.com).