The oath will be taken before President Gotabaya Rajapaksa at 6 p.m. local time. 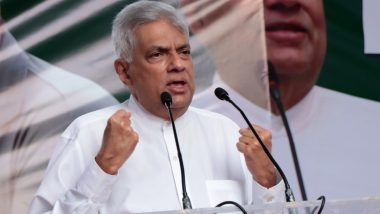 Colombo, May 12: To end the current political deadlock, former Prime Minister Ranil Wickremesinghe will take oath as the new Prime Minister of Sri Lanka on Thursday.

The oath will be taken before President Gotabaya Rajapaksa at 6 p.m. local time.

Vacated after the controversial resignation of former Prime Minister Mahinda Rajapaksa, the elder brother of President Gotabaya, Wickremesinghe is to take up the premiership for the record sixth time in the island nation. Sri Lanka Crisis: Talks On To End Political Impasse After PM Mahinda Rajapaksa’s Resignation.

Mahinda resigned from his post following violent clashes that erupted when his supporters attacked a month-long protest carried out by non-political people. The protesters have been demanding the resignation of the Rajapaksa government and the President amidst a severe financial crisis involving shortages of essentials, including food, fuel, medicine, cooking gas and hours of power outages.

On Wednesday night, while addressing the nation President Gotabaya announced that a new PM and a government would be replaced for the positions vacated by his brother Mahinda and his government.

Gotabaya also said that he would work on reintroducing the 19th Amendment stripping powers of the Executive President which he himself enjoys and giving much powers to Parliament.

He also agreed to abolish the Presidential system. Rajapaksa said the new government would be run by a Prime Minister who can command the majority in Parliament.

However, it is not yet clear as to how Wickremesinghe, the leader of United National Party (UNP) country's oldest political party, now limited to just one seat out of 225 MPs could command the majority. The news on the appointment of Wickremesinghe comes a day after his discussion with President Gotabaya Rajapaksa.

(The above story first appeared on LatestLY on May 12, 2022 03:26 PM IST. For more news and updates on politics, world, sports, entertainment and lifestyle, log on to our website latestly.com).