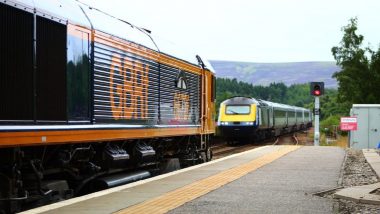 Edinburgh, August 12: In a tragic incident, the ScotRail derailed near Aberdeen on Wednesday Morning. At least 30 vehicles and an air ambulance have been rushed to the spot. The incident took place at 9:45 am local time. Several passengers reportedly injured in the accident. A thick blanket of smoke engulfed the area after the engine of the train caught fire. Till now there are no reports of any casualties in the tragic incident. Coronavirus Outbreak: Schools in Scotland & Wales Ordered to Remain Closed After COVID-19 Death Toll Crosses 70 in UK.

The rescue operation is currently underway. ScotRail officials are assisting the emergency services. "A report was received of a train having derailed near Stonehaven at around 9.45 am on Wednesday, August 12," reported The Sun quoting Scotland Police spokesperson as saying.

Netizens are praying for the speedy recovery of people injured in the accident. The tragic incident took place at a time when severe floods wreaked havoc in several areas of the country, including Stonehaven, following incessant rains. Earlier in the day, ScotRail issued a warning that services across Scotland could be disrupted due to 'extremely heavy rain flooding'. It posted the message on Twitter.

(The above story first appeared on LatestLY on Aug 12, 2020 05:05 PM IST. For more news and updates on politics, world, sports, entertainment and lifestyle, log on to our website latestly.com).