World's Oldest Man Dies at Age 121 in Chile, Here are Other 'Oldest' People who Died in Recent Years

Celino Villanueva Jaramillo, died in the southern Chilean town of San José de Mariquina at the age of 121. 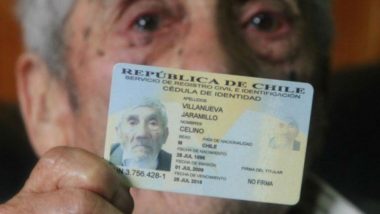 ID Card of Celino Villanueva Jaramillo, who died at the age of 121. (Photo Credit: Sindigo News/Twitter)

Chile, April 19: A 121-year-old man in Chile, who was believed to be the oldest man living in the world, died in hospital on Wednesday, April 18. Celino Villanueva Jaramillo, died in the southern Chilean town of San José de Mariquina reported the Guardian. Celino Villanueva Jaramillo was believed to have been born on 25 July, 1896 but had no official documents to show for it and hence could not be given the title by Guinness book of world records. He had a bed injury after he fell from the bed and broke three ribs. Doctors tried to do their best and he survived a surgery but his condition worsened in the last few days. A family had adopted him when he was 99-years-old and said that they were very sad after he passed away.

Here are a few people who died in recent years and were believed to be the oldest people alive before dead claimed them through its cold embrace:

Everytime someone beyond the age of 100 dies, he or she is termed as the world's oldest person. The reality is that, there is very little that can be done to verify the accurate age of 'very old people' as no documents or official papers survive. Maybe it's because, they outlive the papers. A very long life is indeed an achievement and that person is a living history whose death marks the end of an era. Rest in peace, Celino Villanueva Jaramillo.

(The above story first appeared on LatestLY on Apr 19, 2018 11:59 PM IST. For more news and updates on politics, world, sports, entertainment and lifestyle, log on to our website latestly.com).