The 2020 Malayalam-language action thriller is written and directed by Sachy of Anarkali fame. Abraham was last seen in Sanjay Gupta's Mumbai Saga. 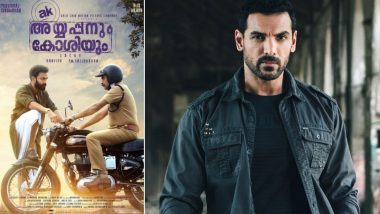 The 2020 Malayalam-language action thriller is written and directed by Sachy of Anarkali fame. “We have the remake of Malayalam film Ayyappanum Koshiyum. We are in the process of putting it all together. It is a beautiful film,” Abraham told PTI. Sasikumar and Arya Roped in for Ayyappanum Koshiyum Tamil Remake?

Besides this film, the 48-year-old actor is also producing slice-of-life film Tara vs Bilal, which features Harshvardhan Rane and Angira Dhar. Abraham was last seen in Sanjay Gupta's Mumbai Saga. His future projects are Pathan and Ek Villain Returns. He is also awaiting release of Satyameva Jayate 2 and Attack, scheduled to arrive in cinema halls this year.