In the 58-second video clip, Shehnaaz Gill urged her fans that if they felt like singing in this monsoon weather, then they should sing their heart out. Check it out! 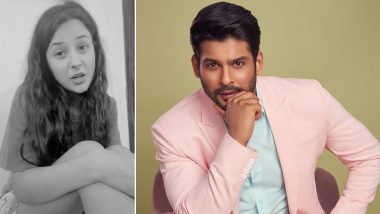 Singer-actor Shehnaaz Gill brought her fans to tears after singing a Bollywood track with absolute perfection, encouraging everyone to do the same without the fear of judgement. Dil ki baat captioned Shehnaaz on Instagram, adding a little heart. In the 58-second video clip, the Bigg Boss fame urged her fans that if they felt like singing in this monsoon weather, then they should sing their heart out. Because, according to Shehnaaz, "Who will judge you?" Shehnaaz Gill Hypnotises With Her Sexy Moves As She Sizzles to ‘Señorita’ Song in Hot Pink Dress (Watch Video).

"If you feel like singing in the rains, then you must. It doesn't matter how much you of the lyrics you know, you should enjoy it. That is what matters," said Shehnaaz before she started singing one of the most soulful tracks of the film MS Dhoni: The Untold Story. The monochrome video showed Shehnaaz singing the lyrics of "Kaun Tujhe", with her amazing vocal skills. She seemed to be sitting on the floor, wearing a simple T-shirt and shorts while keeping her curly hair open. However, it was her gestures that gave the video a serene outcome. Shehnaaz enacted some words in the lyrics with her hands and cute expressions. Shehnaaz Gill Shares a Clip of Her Performance on the BB 15 Finale in Memory of Sidharth Shukla, Calls the Late Actor ‘Bigg Boss G.O.A.T.’ (Watch Video).

At one point, when she sang, "Kaun tujhe yun pyaar karega jaise mei karti huun' Shehnaaz pointed her finger towards the sky, looking up. After completing her singing, she gives virtual kisses on screen to her fans. The video has been widely loved and appreciated by many Instagram users who speculated whether the song was dedicated to late actor Sidharth Shukla, with whom Shehnaaz shared a close bond.

"Oh Mannnn! I know you see him in nature and everything," wrote one user. "The way you pointed at the sky has my whole heart love you forever," commented another. "No one can love like shehnaazgill. And as I always say.. Every Sid should get her Naaz.. SidNaaz forever together in our hearts..." commented a third user.

Sidharth and Shehnaaz, popularly called 'SidNaaz' by fans, got close to each other when they were in the Bigg Boss 13 house, though they never officially acknowledged being a couple. Sidharth later won the reality show in 2020. Sidharth passed away on September 2, 2021 at the age of 40 after a cardiac arrest.