Amitabh Bachchan and Aamir Khan had a warm reunion as they bumped into each other on Monday. Taking to Instagram, Big B shared a picture of his meeting with Aamir. 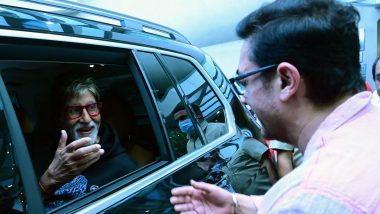 Actors Amitabh Bachchan and Aamir Khan had a warm reunion as they bumped into each other on Monday. Taking to Instagram, Big B shared a picture of his meeting with Aamir. The image shows Amitabh sitting in his car and pulling down his window to chat with Aamir. "And as I am about to leave... a knock on my car window and it's Aamir... gosh! So many legendary friends in one evening," Big B captioned the post. Laal Singh Chaddha Song Phir Na Aisi Raat Aayegi: This Track From Aamir Khan and Kareena Kapoor Khan’s Film Is a Beautiful Soothing Number!

Amitabh looks pleasantly surprised as Aamir greeted him. Amitabh and Aamir have worked together in 'Thugs of Hindostan', which was released in 2018. Unfortunately, the period drama that promised to be one of the grandest films of the year bombed at the box office. Despite being released on 7000 screens worldwide, the film struggled to make even Rs 150 crore at the ticket window. Thugs Of Hindostan revolved around the "thugs" led by the fierce Khudabaksh (Amitabh Bachchan), who pose a threat to the John Clive-led East India Company in 1795 Hindostan. The British recruit Firangi Mallah (Aamir Khan) to infiltrate the band of rebels and get them the leader of the thugs. Aamir Khan Plays Football With Son Azad Rao in Mumbai’s Heavy Rains (Watch Video).

Currently, Big B is busy working on 'Project K', which also stars Prabhas and Deepika Padukone in prominent roles, while Aamir is occupied by the promotional work of 'Laal Singh Chaddha'. 'Laal Singh Chaddha' is an official Hindi adaptation of the Academy Award-winning 1994 film Forrest Gump, which had Tom Hanks in the lead role. It is scheduled to release on August 11 this year.