A large number of decomposed fish of different species were found floating in a pond in Odisha's Ganjam district, officials said on Saturday. 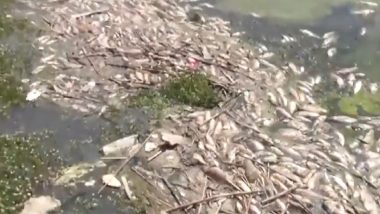 Berhampur, Jul 31: A large number of decomposed fish of different species were found floating in a pond in Odisha's Ganjam district, officials said on Saturday.

Ganjam's district fisheries officer Pramod Rout said the depletion of dissolved oxygen level or pollution in the pond with high organic load might have claimed the lives of the fish. Bengaluru: Hundreds of Dead Fishes Found Floating in Mottanalluru Lake at Bommasandra: Locals Forced To Live With The Stench For A Week.

The exact cause of the deaths at the pond in Krushna Nagar in Berhampur could not be ascertained immediately. Fishery officials also did not rule out poisoning behinds the deaths.

Locals said the dead fish started to appear on Thursday, and the number increased on Friday. Bad smell from the decomposed fish, weighing around a quintal, engulfed the area.

"We've collected the samples of the dead fish, as well as the water of the pond for laboratory tests to ascertain the exact cause of the deaths," Rout said.

As there are no testing facilities at the district fishery office, the samples will be sent to the Fishery College of Odisha University of Agriculture and Technology at Rangeilunda, the officer said.

Fishery officials advised the locals not to fetch the dead fish or use the water of the pond until the test report comes.

"We will request the Berhampur Municipal Corporation commissioner to bury the dead fish," Rout said.