The incident occurred around 1.45 am on Monday when a part of Rajjak Chawl on Kherwadi Road of Bandra East collapsed. 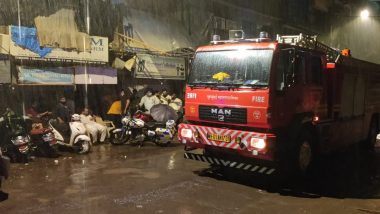 Mumbai, June 7: One person died and five were injured when a part of a building collapsed in the Bandra area of Mumbai in the early hours of Monday.

The incident occurred around 1.45 am on Monday when a part of Rajjak Chawl on Kherwadi Road of Bandra East collapsed.

According to Brihanmumbai Municipal Corporation (BMC), 17 persons were rescued and the injured were sent to the nearest Bhabha Hospital and V N Desai Hospital. Mumbai Fire Brigade and police officials rushed to the spot after the incident was reported. Ulhasnagar Building Collapse: 5 Dead As Slab of Four-Storey Building Collapses, Rescue Operation Underway.

"One person has died and five were injured after part of the building collapsed. The injured have been admitted to the hospital. Officials of fire and police department are present at the spot," said local Congress MLA Zeeshan Siddique.