Virat Kohli on Friday became only the fourth Indian skipper to pile up 4,000 runs in One-Day Internationals. 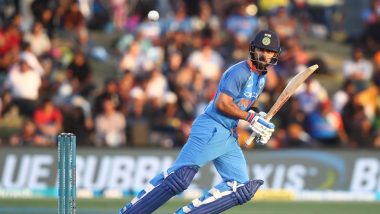 Ranchi, Mar 8 (PTI) Virat Kohli on Friday became only the fourth Indian skipper to pile up 4,000 runs in One-Day Internationals. Kohli, who needed just 27 runs to achieve the feat, accomplished it in his 66th ODI as captain during the third ODI against Australia here. MS Dhoni, Ravindra Jadeja Combine to Pull Off Sensational Run Out During Ind vs Aus 3rd ODI, Watch Video.

Kohli now joins the elite list of former skippers Mahendra Singh Dhoni, Mohammad Azharuddin and Sourav Ganguly. Kohli, who hit a century on Friday, has so far registered 19 ODI tons and 14 fifties from 62 innings as the Indian captain.

Chasing Australia's challenging 313 for 5, Kohli made a classy 123 off 95 balls to keep India in the hunt before being bowled by Adam Zampa at a crucial time. MS Dhoni Hands Specially Designed Army Caps to the Players to Pay Tribute to Martyrs of Pulwama Attack Ahead of IND vs AUS 3rd ODI 2019 (Watch Video).