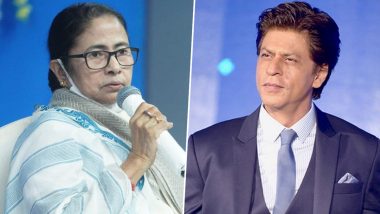 Filmmaker Mahesh Bhatt, lyricist Javed Akhtar, actors Shatrughan Sinha, Richa Chaddha, besides Swara Bhaskar, comedian Munawar Faruqui, and Sudheendra Kulkarni among others were present. "India loves manpower and not muscle power. Unity in diversity is our origin. Unfortunately, we are facing a cruel, undemocratic and unethical attitude of BJP," Banerjee said while responding to a question from Mahesh Bhat on how the liberal forces can be protected from the right-wing. Aryan Khan Changes His Instagram Profile Picture After Returning to Mannat Post Bail (View Pic).

"I know Mahesh Bhatt is victimised, Shah Rukh is victimised. There are many more... Some can open their mouths and some can't," Banerjee said. Khan's son Aryan khan was arrested by the Narcotics Control Bureau (NCB) after it allegedly raided a cruise ship in Mumbai in early October and seized drugs. Aryan (23) spent nearly a month in jail before he was granted bail by the Bombay High Court.

In its detailed order in the drugs-on-cruise case, the high court had said that prima facie no positive evidence was found against the accused to show that they had conspired to commit an offence. Shah Rukh Khan owns the IPL franchise of Kolkata Knight Riders and is known to share a warm relationship with Banerjee. Earlier in the day, Banerjee met NCP supremo Sharad Pawar, a day after meeting Maharashtra minister Aaditya Thackeray and Shiv Sena MP Sanjay Raut.