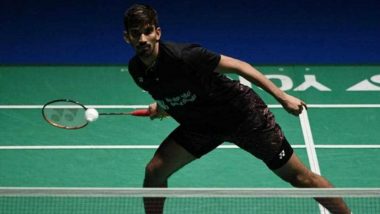 Odense, October 14: Indian shuttler Kidambi Srikanth advanced to the next round of the Denmark Open after defeating England's Toby Penty here on Wednesday.

Srikanth outclassed Penty 21-12 21-18 in just 36 minutes. The 27-year-old won the Denmark Open three years back will face either fellow Indian Subhankar Dey or Canada's Jason Anthony Ho-Shue in the next round.

On Tuesday, 19-year-old Indian Lakshya Sen reached the second round of the tournament with a straight-game win over Christo Popov. Later in the day, India's Ajay Jayaram will take on world number three Anders Antonsen while Subhankar Dey will compete against Canada's Jason Anthony Ho-Shue in their respective first-round encounters.