Barcelona manager Ronald Koeman said Lionel Messi's tribute to Diego Maradona during the team's clash against Osasuna was "great in every sense". 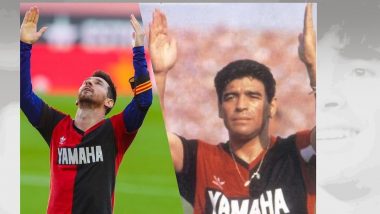 Barcelona secured a 4-0 win over Osasuna in the La Liga match on Sunday. However, the highlighting part of the match was Messi's celebration after he netted the team's fourth goal.

After scoring the goal, Messi took off his Barca shirt to unveil a vintage Newell's Old Boys shirt. It was the shirt worn by Maradona during the 1993/94 season at Newell's, the team where Messi first played before signing for Barca.

Koeman also admitted that he was unaware that Messi was going to do that celebration.

"These are the things of a great player: first because of the play and the goal, and second because of the gesture towards Maradona. It was something really great in every sense. I did not know Leo was going to do that celebration," Goal.com quoted Koeman as saying. Lionel Messi Almost Pulls Off Diego Maradona’s ‘Hand of God’ Goal During Barcelona vs Osasuna, La Liga 2020-21 (Watch Video).

Maradona passed away on Wednesday after suffering a heart attack at the age of 60. Condoling the demise of Maradona, Messi had remembered the legendary footballer by saying that "Diego is eternal". "A very sad day for all Argentines and for football. He leaves us but does not go away, because Diego is eternal. I keep all the beautiful moments lived with him and I wanted to take the opportunity to send my condolences to all his family and friends. RIP," Messi had written on Instagram.

Maradona had begun his professional career with Argentinos Juniors at the age of 16 and he went on to become one of the greatest players to ever play the game of football.

With Boca Juniors, he won one League title; with Barcelona, he clinched one Copa del Rey, one Spanish Super Cup and one Copa de la Liga; and with Napoli, he lifted a UEFA Cup, two league titles, one Coppa Italia and one Super Cup.

With Argentina, he won the World Cup in 1986, a tournament in which he stood out, above all, in a match against England. He scored two goals, including one with his hand which went down in history as 'the hand of God'.