China Accuses US of Testing Its ‘Red Lines’, Expanding NATO in Indo-Pacific

Accusing the US of expanding the NATO into the Indo-Pacific and "flexing its muscle on China's doorstep", Chinese Vice Foreign Minister Le Yucheng on Friday said that the Americans over the years have been inflaming the Taiwan question to test the country's "red line". 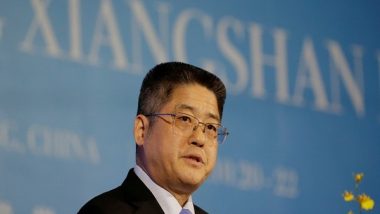 Beijing, May 7: Accusing the US of expanding the NATO into the Indo-Pacific and "flexing its muscle on China's doorstep", Chinese Vice Foreign Minister Le Yucheng on Friday said that the Americans over the years have been inflaming the Taiwan question to test the country's "red line".

The Chinese minister made the remarks while delivering a speech at an online dialogue of global think tanks of 20 countries, Xinhua reported. China's EV Darling Nio Turns to Hong Kong, Singapore Amid US Delisting Risk.

Le claimed that for quite some time, the US has kept flexing its muscle on China's doorstep, creating exclusive groups against China and inflaming the Taiwan question to test China's red line, the report said.

"If this is not an Asia-Pacific version of NATO's eastward expansion, then what is? Such a strategy, if left unchecked, would bring horrible consequences and push the Asia-Pacific over the edge of an abyss," Le said.

The Chinese minister further claimed that China is committed to peaceful development and seeks harmony, solidarity, and cooperation in the Indo-Pacific region, adding that, China has never been a provocateur or troublemaker.

"It makes no sense to take aim at China. The attempt to "copy and paste" the Ukraine crisis in the Asia-Pacific is doomed to fail," Le said according to Xinhua.

Talking about the ongoing war in Ukraine, and China's position on the conflict, Le said that some people have twisted the words of the recent China-Russia joint statement and misinterpreted "friendship has no limits and cooperation has no forbidden areas" to mean that China had "prior knowledge" of Russia's special military operation in Ukraine and even "endorsed" it.

"This is absurd," Le said, adding that China is not involved in the conflict, still less the one who created it. So how could China be responsible?

"The truth is, China desires friendly relations with all countries and we never set any limit on cooperation, nor do we see a need to do so," he further said. China has been under pressure from the Western countries, especially from the US, over its tactic support to the Russian invasion of Ukraine, continuing trade deals, and refusing to condemn the Russian actions.