Men Who Have Sex With Men Advised To Reduce Number of Sexual Partners To Limit Exposure to Monkeypox Virus: WHO

As the cases of monkeypox surged among men who have sex with men, the World Health Organization on Wednesday called to limit exposure to the virus by reducing the number of sex partners and reconsidering sex with new partners. 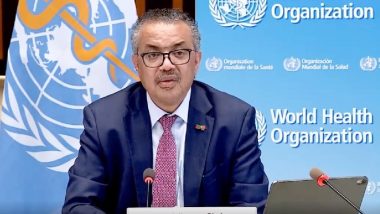 Geneva, July 29: As the cases of monkeypox surged among men who have sex with men, the World Health Organization on Wednesday called to limit exposure to the virus by reducing the number of sex partners and reconsidering sex with new partners.

WHO Director-General Tedros Adhanom Ghebreyesus advised the men to consider reducing their sexual partners for a moment and exchanging contact details with any new partners to enable follow-up if needed. Monkeypox Outbreak in India: 'We Should Not Panic, It Usually Spreads by Very Close Contact', Says ICMR Scientist.

"Although 98 per cent of cases so far are among men who have sex with men, anyone exposed can get monkeypox, which is why WHO recommends that countries take action to reduce the risk of transmission to other vulnerable groups, including children, pregnant women and those who are immunosuppressed," he added.

While Tedros said the focus for all countries must be on engaging and empowering communities of men who have sex with men to reduce the risk of infection and transmission, he also cautioned nations to safeguard human rights.

"The stigma and discrimination can be as dangerous as any virus," he said. Tedros further said that the monkeypox outbreak can be stopped, if the world takes the risks seriously.

"This is an outbreak that can be stopped, if countries, communities and individuals inform themselves, take the risks seriously, and take the steps needed to stop transmission and protect vulnerable groups," Tedros said during a press briefing."The best way to do that is to reduce the risk of exposure. That means making safe choices for yourself and others," he added.

According to Dr Demetre Daskalakis, a US Centers for Disease Control and Prevention (CDC) official working on the monkeypox response, monkeypox is not a sexually transmitted disease but people who have tested positive in the US had some level of sexual activity. That can include penetrative encounters as well as oral sex, CNN reported.

Primarily, the virus is used to spread skin-to-skin and can also be transmitted by touching objects like sheets or towels that may have been used by somebody with monkeypox, as well as through close face-to-face interactions like kissing.

According to the CDC, the researchers are investigating whether the virus can be spread by someone who has no symptoms or through semen, vaginal fluids and faecal matter. CDC further said that condoms alone cannot protect against the spread of monkeypox.

However, the agency still emphasizes that condoms can prevent other sexually transmitted infections. "Reducing your number of sexual partners may reduce your risk," one of the WHO flyers reads as CNN reported.

"How can I protect myself?" another said adding, "To catch monkeypox, you need skin-to-skin contact, including during sex, with someone infectious or their contaminated belongings. To reduce the risk of contracting monkeypox: practice safer sex, keep your hands clean."