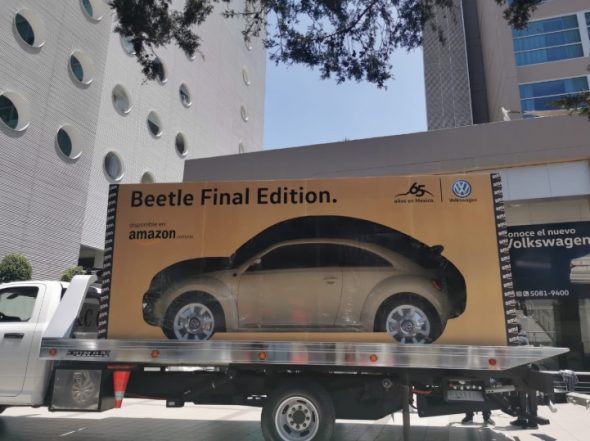 Cuautlancingo (Mexico), August 18: After the German company shut the production of the world's most iconic car - Bettle - in July, car lovers soon regretted the why the rolling stopped. But on Saturday, something amazing happened, as Amazon delivered the first of 65 'Final Edition' Volkswagen Beetles in Cuautlancingo, Puebla state of Mexico.

Considered to be one the most favourite car among the vehicle lovers globally for its unique design, Beetle's production was called off by General Motors' due to financial crunch. However, the few remaining ones are being delivered in special custom boxes to their new owners through Amazon, as they are being sold exclusively by Amazon Mexico. German Prosecutors Charge Former Audi Boss Rupert Stadler with Fraud Over 'Dieselgate'

Expressing his excitement one being delivered the legendary car, one of the owners Joaquin Jasso told news website Expansion about the process that it was very simple as it took him barely three minutes to buy the USD 21,000 vehicle.

It is to be known that though the Beetle was first conceived of in the 1930s as a 'car for everyone', the widespread production could not be done until after World War II. The idea of Beetle was of Adolf Hitler and was designed by Ferdinand Porsche.

Though the car gained popularity globally, the production was stopped. Later in 1997, Volkswagen relaunched the New Beetle, but it failed to woo customers. According to the information, the factory in Puebla manufactured some 1.7 million 'New Beetles' between the vehicle’s redesign in 1997 and 2019.