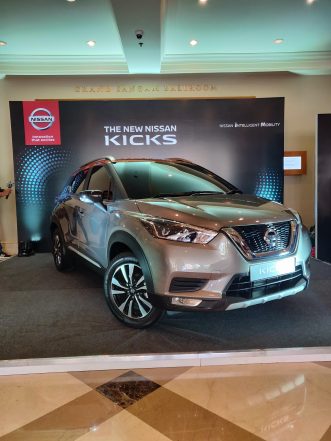 Transmission duties on the Nissan Kicks will be carried out by a 6-speed manual gearbox as standard along with an optional CVT unit for petrol only. Stay tuned for more updates from the unveiling event of Nissan Kicks.

The petrol engine is expected to be a 1.5-litre petrol and 1.5-litre diesel engines that will be tuned to develop 108Bhp and 109Bhp respectively. More details are expected to be revealed at the event.

The upcoming Nissan Kicks is expected to be offered in both petrol and diesel engine options. It will be based on the M0 platform, which is also employed by Renault Duster, Captur and Nissan Terrano.

The unveiling proceedings for the Nissan Kicks has just commenced. Keep refreshing the page for more updates.

The event is about to start in next couple of minutes. Stay tuned for more quick updates from the unveiling event of Nissan Kicks.

When launched in India, Nissan Kicks will be positioned above Nissan Terrano and will take on the rivals such as Hyundai Creta and upcoming Tata Harrier SUV.

Nissan India is all set to reveal the highly awaited Nissan Kicks SUV in India today at an event in Mumbai. Stay tuned for more updates from the venue.

Nissan India is all set to unveil the much anticipated Kicks SUV in India today. The Kick SUV will be a premium offering from the Japanese auto manufacturer that has been awaited in the Indian market for about couple of years. Already on sale in the global market, the Nissan Kicks finally will be hitting the domestic market. Though, the SUV will be revealed today, the pricing and other details are expected to be announced by early 2019 (probably January 2019). Moreover, the company is also streaming the unveil event, which can be watched here - Nissan Kicks SUV to Be Unveiled in India Today; Here’s How You Can Watch the LIVE Streaming of the Event.

Talking about the SUV, the company has been teasing the new Kicks SUV on the social media platforms. The teasers also revealed the signature-style V-motion front grille and LED tail lights that will be incorporated on the SUV. Taking its design cues from the international model, the SUV will remain identical as that of Terrano. To be based on M0 platform, the SUV will share the platform with Captur, Terrano and Renault Duster.

As far as the powertrain options are concerned, the new Nissan Kicks will be offered with a choice of petrol and diesel engines. The petrol will be a 1.5-litre petrol engine that can produce 102bhp of max power whereas the oil burner will churn out peak power of 108bhp. Transmission duties will be carried out by 6-speed manual gearbox along with an optional CVT unit for petrol only. To be priced in the range of Rs 10 - 14 lakh (ex-showroom), the 5-seater SUV will compete against forthcoming Tata Harrier, Renault Captur and Hyundai Creta.