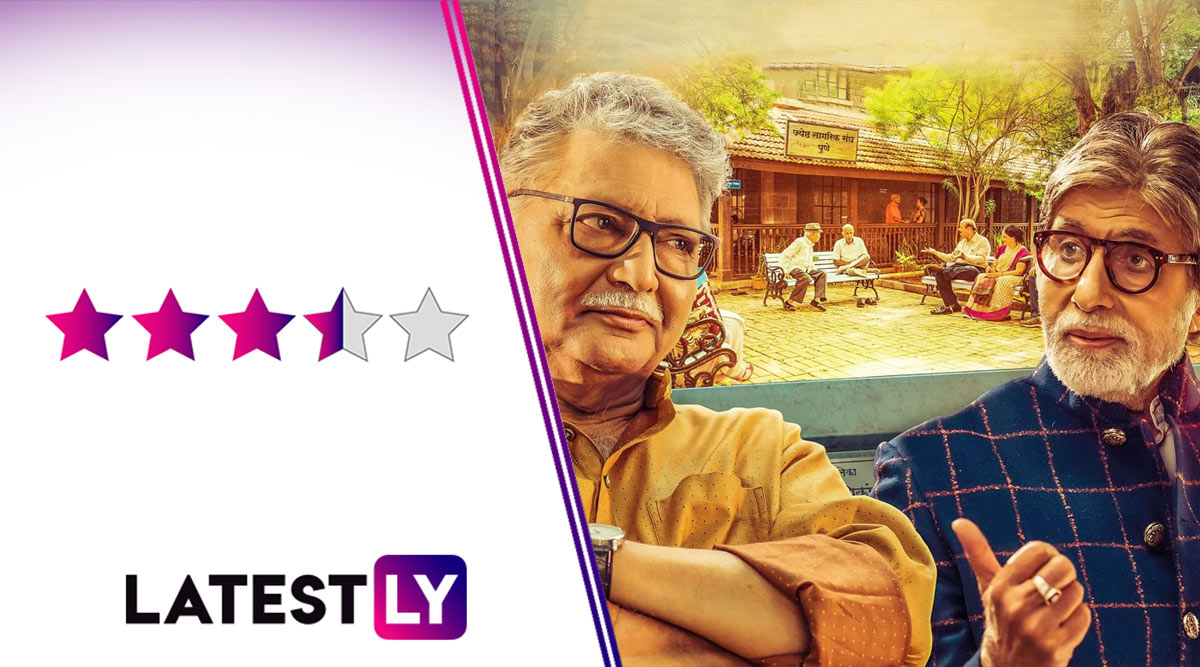 AB Aani CD Movie Review: How many (more) years are we going to witness this? The moment Amitabh Bachchan walks into the frame, he simply lights up the big screen with both his persona and personality in this Marathi movie titled AB aani CD. His swag, his walk and his god-like aura are enough to arrest your attention. So much so that in the climax you either start worshipping him (all over again) or you are awed by his hypnotic presence or simply put, you want to convey a heartfelt thanks for what he brings to the silver screen. So the question remains, how many (more) years are we going to witness this glory? The answer is as obvious as the charm of the man who walks tall and handsome: Many more years to come!

And yet one must not forget the fact that AB aani CD (stands for Amitabh Bachchaan and Chandrakant Deshpande), produced by Akshay Bardapurkar and directed by Milind Lele, is about the supremely gifted Vikram Gokhale, the  institution of acting himself, who gets nearly every nuance of his character right. There are moments though when his craft goes a couple of notes above the pitch required, and in some places even melodramatic, but Gokhale brings his powerful performance into play in this slice-of-life drama.

Those who have seen the trailer would vouch for the simplicity of the story and the much-expected surprise entry of Mr Bachchan. The story-line is familiar and overtly linear in terms of narration. Ignored by his own family and tired of the loneliness that comes with age, 75-year-old Chandrakant Deshpande's life turns upside down when he receives a letter from the country's biggest superstar Amitabh Bachchan claiming to be his childhood friend. The news doesn't take long to spread in the neighborhood.  And soon the event starts acquiring an incredible magnitude.

From getting his favorite paintings back on the wall to fixing the window panes of his bedroom, Chandrakant's family starts paying attention to every need and wish that must be fulfilled. Everybody suddenly starts respecting the man who once used to be the pal of Big B. Things start troubling the old man when his friends, family members and even those who want to cash in on his new-found 'celebrity status' request the presence of the superstar himself at a grand function! Will Chandrakant apologize for the antics he is not exactly responsible for? Or will Amitabh Bachchan really make his grand presence felt to respite the situation? You know the answer to that one but do watch the story unfold on the big screen to rejoice that larger-than-life moment dished out by the GOD himself.

As for the performances of the supporting cast, a special mention here for Akshay Tanksale for the ease with which he portrays his boy-next-door with innovative ideas in the head character. CD's family members and his senior citizen friends have played their part well. Director Milind Lele has given an inclusive family watch without  complexity or convoluted parts. 20 minutes shorter and minus a couple of songs, the film would have been crisper.

All in all, watch this one for Vikram Gokhale's craft and for the simplicity of the narrative. And, of course, don't miss Big B's entry that deserves an extra half star!