19 Years of Tum Bin: Anubhav Sinha Reminisces About His Directorial Debut, Says ‘It Changed Everything for Me’ 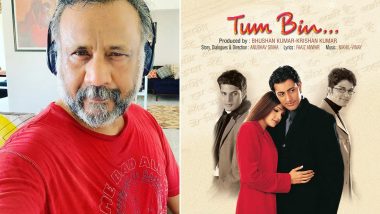 Director Anubhav Sinha on Monday said the release of "Tum Bin", his directorial debut that celebrates its 19th anniversary on Monday, changed everything for him. Sinha, who has established himself as a director known for issue-based films like "Mulk", "Article 15" and recently "Thappad", started his journey with the 2001 hit romance drama. The filmmaker took to social media to express gratitude towards the audience for loving the film for almost two decades. "Some films run and some don't. Very few live a very long life. I'm so grateful that my first film has been loved for 19 years and counting.

"This date 2001 it changed everything for me. Forever. Thank you Team. #TumBin," he wrote on Twitter. 2 Years of Soorma: Diljit Dosanjh Was Initially Hesitant to Star in Sandeep Singh Biopic

The film starred Priyanshu Chatterjee as Shekhar who goes to Canada to ask for forgiveness from Amar's (Raqesh Bapat) family for accidentally killing him.

Overcome with guilt, he helps Amar's fiancee Pia (Sandali Sinha) revive her dying business but falls in love with her secretly. Bapat also thanked the audience for the "relentless love" over the years. "It was Friday the 13th that changed my life forever for good! 19 years of #TumBin," he wrote on Instagram alongside the poster of the film, which was his acting debut. 8 Years of Cocktail: How Imran Khan’s Rejection Helped Saif Ali Khan Bag the Role

Some films run and some don’t. Very few live a very long life. I’m so grateful that my first film has been loved for 19 years and counting. This date 2001 it changed everything for me. Forever. Thank you Team. #TumBin https://t.co/WP8Ydz97ra

A sequel of the film, "Tum Bin 2" starring Neha Sharma, Aashim Gulati and Aditya Seal was released in 2016. The original film was remade in Telugu as "Ela Cheppanu" (2003) with Tarun and Shriya Saran in the lead.