A Woman Apologises To Ali Zafar For Falsely Accusing Him Of Harassment; The Singer Calls Her Courageous

A woman who accused Ali Zafar of harassment has apologised on Twitter for her remarks. The Pakistani actor-singer has welcomed it asking people to refrain from judging her. 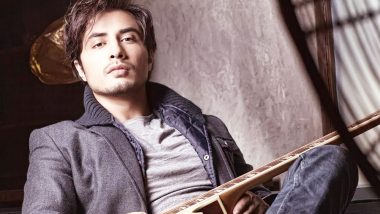 The MeToo movement opened a can of worms last year, implicating a lot of industry folks in its wake. One was Meesha Shafi's sexual allegations on Pakistani singer-actor Ali Zafar. Another woman also tweeted how a victim had confided in her about the way Zafar harassed or treated her. Now the same woman has apologised to the singer-actor for wrongfully implicating him. Zafar has welcomed the apology, calling her a courageous woman. Ali Zafar-Meesha Shafi Sexual Harassment Row: Pakistani Singer-Actor Breaks Down on National Television (Watch Video)

Sofi writes, 'Ali Zafar  I am sorry that a lie I was told & believed hastily( bcos liar ws very young) though deleted is still being used to bash you & cause you pain. I shud have clarified much sooner but I was afraid of the trolls & online stalking & abuse. I hope this can atone for it.' She even mentioned how she is not doing this out of fear but because her previous tweet is still used by many to bash Zafar.

Check it out here...

The most courageous, brave and graceful thing you can do is accept and apologise for your mistake. I want everyone to respect this girl now and forever. Do not doubt or judge her or her intentions. She is verified to be a real and genuine victim of harassment who was misguided like many others at the time. She recreated and posted this from the same account she had posted from last year and deleted which is part of the legal record. This should be a learning curve for all to always verify FACTS before reaching any conclusion. Once again, thank you for your faith and love. Much love.

It's really big of Zafar to ask people to refrain from judging her. He had earlier said that the allegations had ruined his personal and professional life. He had broken down on camera to narrate his ordeal post the allegations. Guess this will bring him some peace.

(The above story first appeared on LatestLY on Sep 26, 2019 12:48 PM IST. For more news and updates on politics, world, sports, entertainment and lifestyle, log on to our website latestly.com).