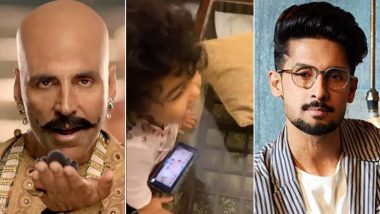 Ever since the 'Bala' song from Akshay Kumar starrer Housefull 4 had dropped online, people went gaga over it. Not just fans, even many prominent celebrities were seen humming and trying to ace the hookstep of the chartbuster. It was Akki who had started the Bala challenge on social media, which was a huge hit. Ranveer Singh, Varun Dhawan, Kareena Kapoor Khan to even Australian opener, David Warner had grooved to the melody. Well, even after being a 2019 song, it looks like the craze for the same is not over yet. As Akshay just shared a video on his Twitter which sees television actor, Ravi Dubey's little nephew giving him a tough competition. David Warner Grooves to Housefull 4 Song ‘Bala’ in Latest TikTok Video, Say ‘I’ve Got You Covered Akshay Kumar’.

However, this time the little child is not dancing, but lip-syncing the Bala lyrics and must say he is doing a great job. Impressed with the kiddo's grasping skills, the only Khiladi of Bollywood retweeted the clip which mentioned how the tiny tot is a huge fan of the actor. "He’s got the lyrics bang on, too cute," Kumar replied to the video. Kareena Kapoor and Good Newzz Stars Take Up Akshay Kumar’s #TheBalaChallenge From Housefull 4 (Watch Video).

Check Out The Video Shared By Akshay Kumar Below:

He’s got the lyrics bang on 😂 Too cute ♥️ https://t.co/EtAcsxJ1Bu

Meanwhile, on the work front, Akshay is gearing up for the OTT release of his film, Laxmmi Bomb. The said movie is all set to make its way on Disney Plus Hotstar. This one is also the official Hindi remake of 2011 Tamil film Kanchana, which starred Raghava Lawrence as the lead. Stay tuned!

(The above story first appeared on LatestLY on Jul 07, 2020 08:07 PM IST. For more news and updates on politics, world, sports, entertainment and lifestyle, log on to our website latestly.com).