Anupam Kher Joins the Cast of Sooraj Barjatya’s Next With Amitabh Bachchan, Boman Irani; Film to Be Titled Oonchai

Anupam Kher will be essaying the role of Amitabh Bachchan and Boman Irani's friend in the film. The film is said to chronicle the life of a couple of friends who grow old together in the classic 'Barjatya' style. 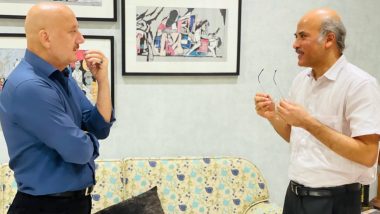 It was just a few days ago when we informed you that Sooraj Barjatya is looking forward to directing Amitabh Bachchan and Boman Irani in a film. The project was a result of Salman Khan's busy schedule due to which Barjatya had to delay his film with the megastar and work on another. It was being reported that since Sooraj Barjatya was itching to work on a film and has some spare time to him, he decided to work on the project that stars Bachchan and Irani. Now Anupam Kher has confirmed that he is a part of the film too. Sooraj Barjatya to Work With Amitabh Bachchan and Boman Irani Next, Courtesy of Salman Khan’s Busy Schedule.

According to certain media reports, Anupam Kher will be essaying the role of Amitabh Bachchan and Boman Irani's friend in the film. The film is said to chronicle the life of a couple of friends who grow old together in the classic 'Barjatya' style and we will get to see the three veteran actors weave a magical story for the audience. It was also stated earlier that the film would go on floors in February 2021, but it looks like the makers have locked September as the month for the commencement of the shoot. Anupam took to social media to thank Barjatya to make him a part of this film.

Not just that, Sooraj Barjaya has narrowed down the word Oonchai (heights) for the title of the film. The reports also suggested that there will be another possible addition to the cast of the film and the makers are looking for a 2022 release date for the film. The film is said to be in the pre-production stage currently. The family values that make a Barjatya film exclusive will be instilled in this story as well. While Anupam Kher might have given his nod tot he film, we wait to get a confirmation about Bachchan and Irani as well. Sooraj Barjatya Hints at Reuniting with Salman Khan for his Next.

Back in 2020, Sooraj Barjatya had revealed that he is already penning his next film and superstar Salman Khan, has liked the idea. "I am writing it. In a year or two, I will be done. I have discussed the idea with Salman and he has liked it. It is in my space -- family, drama and emotions," Barjatya told PTI in an interview. However,  Salman is currently busy with different projects. He will be seen in Radhe: Your Most Wanted Bhai next and is also a part of Shah Rukh Khan starrer Pathan. Salman will also be seen in Mahesh Manjrekar's Antim, locking horns with Aayush Sharma.

(The above story first appeared on LatestLY on Feb 24, 2021 06:38 PM IST. For more news and updates on politics, world, sports, entertainment and lifestyle, log on to our website latestly.com).