It's still unclear if Shilpa Shetty and Katrina Kaif will return for this sequel. Post the official announcement, we know Apne 2 will go on floors in March 2021 and will hit the screens in Diwali 2021. 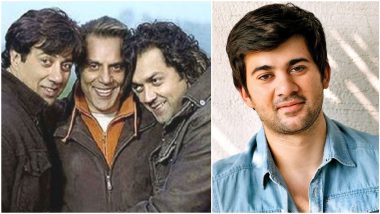 The much-awaited and expected announcement has finally come through. Apne starring the Deols will finally have a sequel with a new addition. This Anil Sharma directorial enjoyed a successful run at the box office and its success made us assume if they will collaborate for a sequel anytime soon. The original movie released in 2007 and starred Katrina Kaif and Shilpa Shetty along with Sunny, Bobby and Dharmendra. The sequel, however, will also have Sunny's elder son, Karan Deol as a part of it. Sunny Deol and Karan Deol in Pal Pal Dil Ke Paas, Rakesh Roshan and Hrithik Roshan in Kaho Na Pyaar Hai – 5 Times When Actors Directed Their Son’s Debut.

Three generations of the Deols are finally coming together for a project and the excitement for which is already high among us. The original movie revolved around a wrecked boxer who turns to his sons to win the glory that eluded him in the ring. It was more of an emotional drama that struck a chord with the audiences. The sequel is expected to be on the similar lines and we hope it's able to give Karan the recognition that he's aspiring for. Dharmendra Has Some Words of Wisdom for Grandson Karan Deol and Saher Bamba for Their Debut Film Pal Pal Dil Ke Paas – Watch Video.

#Apne2 is a directorial venture of Anil Sharma. He has created stellar movies before. It is great that today he has announced his next venture. pic.twitter.com/3aGVMezozJ

It's still unclear if Shilpa and Katrina will return for this sequel. Post the official announcement, we know Apne 2 will go on floors in March 2021 and is slated for a Diwali 2021 release.

(The above story first appeared on LatestLY on Nov 30, 2020 10:42 AM IST. For more news and updates on politics, world, sports, entertainment and lifestyle, log on to our website latestly.com).