Salman Khan's Inspector Chulbul Pandey is all set to get an animated avatar in the Dabangg: The Animated Series, but the superstar won't be voicing the popular character in the show. 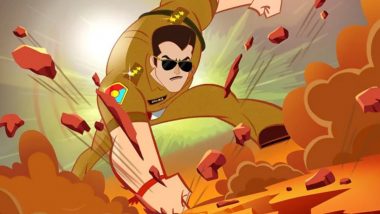 Salman Khan's Inspector Chulbul Pandey is all set to get an animated avatar in the Dabangg: The Animated Series, but the superstar won't be voicing the popular character in the show. "It's a different show and in a completely new vertical we had to make a few changes to it. Also, the voiceover artistes have done a fabulous job and have done complete justice to the characters. I am sure the viewers won't be disappointed," says Salman's brother Arbaaz Khan, who has produced the show. Tiger 3: Is Emraan Hashmi Hiding His Newly Packed Physique for Salman Khan-Starrer? (LatestLY Exclsuive!).

"The thought behind creating Chulbul Pandey was to make him a household favourite, and the biggest and most humbling compliment comes from the love this character has received from children. This inspired us to create an animated series based on Dabangg," Arbaaz adds. Salman Khan on COVID-19: We Need To Stay Positive Until These Bad Times Pass.

"Dabangg: The Animated Series is an adaptation and reimagination of Dabangg. The action-comedy series chronicles the day-to-day life of police officer Chulbul Pandey, who stands in the face of evil to keep the city safe. He is also joined by his younger brother Makkhi, who, new to the police force, attempts to emulate his older brother in every sticky situation," he informed about the show, which streams on Disney+ Hotstar VIP.

About his upcoming projects as an actor, Arbaaz said: "I've got some interesting projects lined up right now. There's a yet-untitled web series with Applause Entertainment and two feature film projects - "Rosie", a supernatural thriller and "Chakri" an interesting drama."

(The above story first appeared on LatestLY on Jun 04, 2021 11:39 AM IST. For more news and updates on politics, world, sports, entertainment and lifestyle, log on to our website latestly.com).