Ardh: Rajpal Yadav Shares How He Was Mistaken for a Transgender While Shooting for Rubina Dilaik’s Film

Actor Rajpal Yadav talks about his upcoming film, Ardh in which he is playing the role of a transgender. 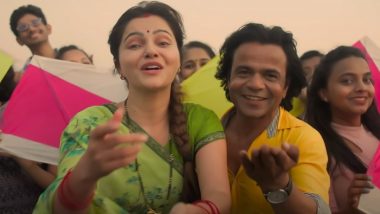 Actor Rajpal Yadav talks about his upcoming film, Ardh in which he is playing the role of a transgender. He revealed how in reality people thought he is a transgender during the shoot and no one recognised him. He shares: 'When we were shooting, I was dressed up as a kinnar and walking through traffic." Ardh Song Ishq Ka Manjha: Rubina Dilaik and Rajpal Yadav’s Romance Is Cute in This Number (Watch Video).

"Interestingly, no one recognised me, and one even went on to hand me a ten rupee note confusing me with an actual kinnar. This was a humbling experience for me as an actor," he adds. Ardh Trailer Out! Rajpal Yadav as a Transgender Struggles To Become an Actor in This Web Film Co-Starring Rubina Dilaik and Hiten Tejwani (Watch Video).

In 'Ardh', Rajpal plays the role of an aspiring actor who struggles to get his big break in films, despite auditioning every day. He then dress up as a transgender to support his wife and his son. The film also stars actors Rubina Dilaik, and Hiten Tejwani in the lead roles alongside Rajpal Yadav.

(The above story first appeared on LatestLY on May 23, 2022 06:07 PM IST. For more news and updates on politics, world, sports, entertainment and lifestyle, log on to our website latestly.com).