As Salman Khan’s Radhe Promises To Come in Theatres, Let’s Give Box Office Records a Break for the Time Being – Here’s Why! (LatestLY Exclusive)

In an announcement that would bring much-needed cheer to distributors and exhibitors, Salman Khan tweeted that his upcoming film, Radhe: Your Most Wanted Bhai, would be releasing only in theatres during Eid. Radhe, directed by Prabhu Deva, also stars Disha Patani and Randeep Hooda. 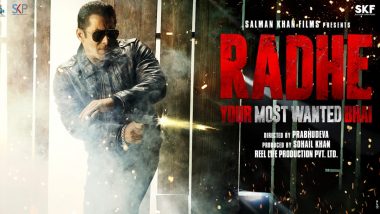 In an announcement that would bring much-needed cheer to distributors and exhibitors, Salman Khan tweeted that his upcoming film, Radhe: Your Most Wanted Bhai, would be releasing only in theatres during Eid. This huge announcement comes in the wake of rumours that the Prabhu Deva directorial could opt for an OTT release, like some of the biggies like Coolie No 1 and Laxmii forced to do so due to COVID-19 outbreak. And with a superstar film releasing, we would be back to talking about Rs 100 crore, 200 crore, 300 crore clubs. Exciting times, right? Not exactly! Radhe: Salman Khan Starrer To Release In Theatres During Eid This Year, Confirms The Superstar.

Before I get into why we need to drop this crore club chatter for some time, let's have a glimpse of the world around us. Let's put up some optimism and say that after a terrible year, 2021 puts up the impression that things are going to be better. The number of active COVID-19 cases have gone down and there is a hopeful promise of two vaccines doing their wonders. Theatres have opened across the country albeit operating at 50 percent seating capacity. Precautions are there, situations are improving but that doesn't mean that we have to put our shields down.

Which is why this one sentence in Salman Khan's post on Radhe is so important - "In return, I would expect them (the theatre-owners) to take utmost amount of care and precautions for the audience who come to the theatre to watch Radhe."

It doesn't not matter if Radhe turns out to be a good film or not. Salman Khan films are known to draw in huge crowds, which is why it is important for Radhe to release only in theatres and save the adversely-affected theatre business.

Down South, we have seen how Ravi Teja's Krack, Vijay's Master and Silambarasan's Eeswaran are doing brisk business even with the reduced seating capacity. But we have also read articles on theatres breaking COVID-19 guidelines to increase ticket sales and getting fined as a result. We has also seen videos of crowds flouting social distancing restrictions, as they shoved and pushed their way to book tickets during advance sales.

Which is why Salman Khan's request is particularly important right now, as Radhe readies itself to arrive in theatres. We can expect the same kind of euphoria we saw for a Krack or Master in Radhe's reception, but that has to come with a certain responsibility that needs to be shared by theatre-owners, fans, trade analysts and even the media. One measure that no one will tell us but we have to take on our own is give box office comparisons a break.

Look, we all know that even a bad Salman Khan can break the Rs 100 crore barrier, Race 3 and Dabanng 3 being good examples of this. At the box office, the superstar is basically untouchable. But we can't deny that Radhe's collections would be affected with the ongoing restrictions. The limited seating capacity will definitely bring down the forecasted collections that Radhe would have usually done in a normal situation. From Radhe to Tiger 3, Salman Khan To Have 4 Back-to-Back Films Releasing in 2021?

So while we are reporting the box office figures for Radhe, when it comes out on Eid, let's also remember the circumstances that the film is coming out. In 2020, three big Hollywood movies - TENET, Mulan and Wonder Woman 1984 - were sent for theatrical releases. In usual circumstances, they were touted to make over a billion dollars at the global box office. While there was criticism over the movies being sent to 'die' at the theatres in the extenuating circumstances, there was some responsible coverage to its box office collections. We hardly read stories comparing the collections of Wonder Woman 1984 to that of the first Wonder Woman film.

I expect that kind of responsible reporting when it comes to Radhe's collections. Or for the matter, any movie that is coming before or after Radhe. A couple of weeks back, actor Manoj Bajpayee slammed a reputed trade analyst, whom I do not wish to name here, for deriding the collections of Ram Prasad Ki Tehrvi, a small film that had the guts to release during New Year. This is exactly what I am talking about.

When superstar's film arrives, the noise gets bigger, The fanclubs get noisier, comparisons will be thrown around and in the end, this will add pressure on producers who will push that on to the distributors which will fall on the theatre-owners, pressuring some to give in and break protocols to bring more audience in the halls. We are mostly likely to see multiplexes give freebies to bring in the crowds. We don't expect anyone in this country to play by the rule, but why give them the excuse?

I am not saying not to report given box office collections, but let's avoid the 'Sharmaji Ka Beta' kinda comparison. Radhe's performance and how we react to it is very crucial, since the studios backing delayed biggies like Sooryavanshi, '83, Brahmastra etc will be keenly watching the situation. By not bringing box office comparisons in the equation, these producers would be in a free mind to get their films in theatres without having a concern of being sized up with other films that came before.

It is important that theatres make money first, so that our screens are saved and jobs are secure, The celebrations can come later, when the virus is done with and we can breathe free enough to shout in jubilation without our masks on. For now let's all take a resolution to give box office records a break for the time being, and let's cheer whatever business Radhe and any other movie is bringing to the houses that strive to entertain us.

(The above story first appeared on LatestLY on Jan 19, 2021 08:07 PM IST. For more news and updates on politics, world, sports, entertainment and lifestyle, log on to our website latestly.com).