Bell Bottom: Lara Dutta Opens Up About Her Look, Mahesh Bhupathi's Hilarious Reaction to it and Her Real-Life Indira Gandhi Connect (LatestLY Exclusive)

Here's Lara Dutta speaking to LatestLY about her look, her family's reaction, the Gandhi family's no-reaction and Bell Bottom's fate at the theatres. She also mentions her real-life Indira Gandhi connect which is quite interesting. 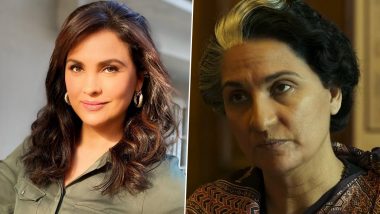 Bell Bottom's trailer released and everyone was left in awe of Lara Dutta's transformation. In fact, there were probably many who couldn't believe how Lara achieved the perfect getup and stance of the former Prime Minister of India, the late Indira Gandhi. It took Lara three hours to get into the character entirely, complete with prosthetics, hair and clothes, while another hour went in taking it all off.  While fans fawned over her, back home Dutta received some interesting reactions. Here's Lara Dutta speaking to LatestLY about her look, her family's reaction, the Gandhi family's no-reaction and Bell Bottom's fate at the theatres. Bell Bottom: Lara Dutta Shares BTS Video Showing How She Became Indira Gandhi For Akshay Kumar’s Spy-Thriller

Social media just can't stop admiring you and your look as Mrs Gandhi in Bell Bottom. How was the reaction at home?

(Laughs) I was quite shocked too. When I got ready for the first time, I had to look quite hard to find myself behind the getup. I could understand when nobody could recognise me. My daughter is more amused and intrigued because she has been part of the entire process from the time we started the prep. She was just amazed. My husband (tennis champ Mahesh Bhupathi) was a bit freaked out. When I got completely ready, he would just go like 'Erm... I don't know if I am supposed to hug you because I can't see my wife anywhere.'

One of the biggest and most valuable compliments that I have received is from my father. He used to be Mrs Gandhi's pilot when he was in the Air Force. For him to give his stamp of approval on how real it was, has been my biggest compliment.

In the last two days, I have received such an overwhelming response from everyone. It's as if I have won Miss Universe again after 21 years.

Did you get in touch with the Gandhi family or receive any kind of reaction post the trailer release?

The way we worked on the film, people only knew loosely about what Bell Bottom is based on. Nobody had a concrete idea. Also, we have just released the trailer. I haven't heard anything from the family yet.

How did you do your research on Mrs Gandhi to get the mannerisms right?

It was a two-phase process. One was getting the resemblance right; getting prosthetics and the hair to closely resemble Mrs Gandhi. That was the challenge. Once we managed to get the look right, the next step was for the performance to match that. I did a lot of research as well. Director Ranjit Tewari sent me a whole lot of videos and archival footage of Mrs Gandhi. She was never prone to dramatics, always in control even when at that time a lot was happening due to the hijacking. I observed tiny things, eye movements and all. Then from my father's side, I got a whole lot of information about how she used to interact with people. All that helped.

How faithful is Bell Bottom to the 1984 Indian Airlines Airbus A300 hijacking incident?

The film is obviously inspired by the incident and the people. We are obviously not rewriting history. This film is not making a historical or political statement of any kind. It is an entertaining film which many should watch since theatres are opening up after a long time.  Bell Bottom Trailer: Lara Dutta as Former Indian PM Indira Gandhi Stuns Netizens With Her Transformation!

Maharashtra has not allowed theatres to open yet. Do you think that will impact Bell Bottom's earnings gravely?

We are hoping that by the time the movie releases, Maharashtra opens up, even if in a limited capacity. I think it is important to revive the industry. In the scenario we are in, I don't see COVID-19 going away anywhere in a hurry, but we have to go on.

(The above story first appeared on LatestLY on Aug 05, 2021 07:39 PM IST. For more news and updates on politics, world, sports, entertainment and lifestyle, log on to our website latestly.com).