Jersey has Shahid and his father Pankaj Kapur playing unrelated roles yet again. That made us wonder which other real-life father-son pair played unrelated roles. We found five of them. 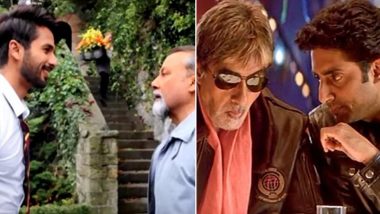 Jersey trailer is quite interesting and made all the right noises. Shahid Kapoor seem to have found a calling in doing remakes with a strong message and not just massy stuff. Cricket has always been a sport of interest for Bollywood but it has been a while since we saw a movie on it, although Jersey is more about Shahid's life and situation than the game itself. We love the flawed character sketch of the lead without any frills or flare. We also noticed how yet again Shahid and his father Pankaj Kapur are playing unrelated roles. Shahid Kapoor on Jersey: Acting in a Remake Version Is More Difficult as Compared to Playing Original Characters

That made us wonder which other real-life father-son pair played unrelated roles. We found five! Jersey Trailer: Shahid Kapoor Is Back To Surprise You With Another Compelling Role, Mrunal Thakur Adds the Charm (Watch Video)

Shahid and Pankaj Kapur worked together in Shaandaar as well. Even in that film, both of them didn't play father and son. Instead, Kapur was Alia's father who disapproved of her closeness to Shahid.

Abhishek and Rani Mukerji played con artists in the film while Amitabh Bachchan played Dashrath Singh, a cop who tracks them to arrest them. No relation again!

Yet again, this movie too had Rishi Kapoor and Neetu Kapoor as cops chasing Ranbir Kapoor who is a car-thief.

(The above story first appeared on LatestLY on Nov 24, 2021 08:11 PM IST. For more news and updates on politics, world, sports, entertainment and lifestyle, log on to our website latestly.com).