Shahid Kapoor on Jersey: Acting in a Remake Version Is More Difficult as Compared to Playing Original Characters

Shahid shared he practised at the nets for four months before beginning the shoot for "Jersey" and played for two-and-half months once again when the team resumed filming in Mohali after the coronavirus pandemic-led lockdown was lifted. 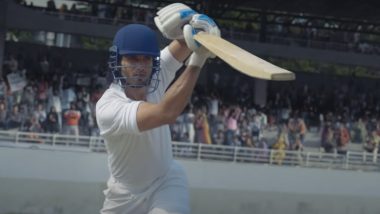 Bollywood star Shahid Kapoor, who has acted in two Telugu remake films "Kabir Singh" and "Jersey", on Tuesday said acting in a remake version is more difficult as compared to playing original characters. The 40-year-old actor attained massive commercial success with 2019's "Kabir Singh", a Hindi remake of the 2017 Telugu film "Arjun Reddy" starring Vijay Deverakonda.Shahid is now awaiting release of "Jersey", a remake of actor Nani's movie by the same name. Jersey Trailer: Shahid Kapoor Is Back To Surprise You With Another Compelling Role, Mrunal Thakur Adds the Charm (Watch Video).

"I have realised it is very difficult to do a remake, and sometimes even tougher than doing an original character because you have to make it fresh, it cannot look like copy-paste. You have to rediscover it all over again," Shahid told reporters here at the trailer launch event of "Jersey". Drawing comparisons between working in an original film and a remake, the actor said he has been part of some original films which turned out to be "scary experiences" and that remakes are "helpful" in a certain way. Jersey Trailer Reaction: Fans Compare Shahid Kapoor’s Performance With Nani, Say ‘No One Can Match the G.O.A.T.’.

"I have been a part of a few movies which I thought were going to be a certain way and then when I saw them I was like, ‘Did I really sign this film?' I would open the script again just to confirm it. So I have had some very scary experiences. "So, I must confess that being a part of a remake is definitely helpful as an actor. You understand what the story is and how the filmmaker wants to express himself while putting that story together and bringing his vision to it," he added.

"Jersey" chronicles the story of a talented but failed cricketer, who decides to return to the field in his late 30s driven by the desire to represent the Indian cricket team and fulfil his son's wish for a jersey as a gift. Gowtam Tinnanauri, who helmed the 2019 original that received two trophies at the National Film Awards including best Telugu feature film, has also directed the Hindi version.Shahid said he underwent cricket training for a few months to get into the skin of his character.

Having played a lot of cricket during his school days, the actor said while the experience came handy, there was a "lot of work to be done". "I am 40 years old so it pains a lot, everything starts hurting. You are not a 20-year-old, who can pick up a bat and start playing, cricket is a completely different skill and cricket is the most popular sport in the country. We take our cricket very seriously," he said. Shahid shared he practised at the nets for four months before beginning the shoot for "Jersey" and played for two-and-half months once again when the team resumed filming in Mohali after the coronavirus pandemic-led lockdown was lifted.

"One thing I can say proudly is that there is no shot in the film which is played without a season ball, we have no CG (computer-generated) shots... We worked very hard to bring authenticity to the sport part of it." At the heart, Kapoor said "Jersey" is not just a sports drama but a story about human triumph. "You should always chase your dreams and it is never too late. Age is never a barrier and this film is about that," he added.

The film also stars Mrunal Thakur and Pankaj Kapur in pivotal roles. Shahid, who is reuniting with his father and veteran actor Kapur for "Jersey", said it is scary to work with one's father especially when he belongs to the same profession. The real-life father-son duo have previously shared screen space in "Mausam" (2011) and "Shaandaar" (2015). "It is still nerve wracking working with him but it is also a pleasure working with him. I am not intimidated by him, intimidation is a wrong word. When you have so much respect and regard for somebody you want to be able to be the best.

"As an actor it is amazing to be standing in the same frame with a great actor, regardless of if he is my father or not. It is about two people standing in the frame as actors and seeing what he is doing with his craft honestly was a great learning for me," he added. Presented by Allu Arvind and backed by Aman Gill, Dil Raju, and S Naga Vamsi, "Jersey" is slated to be released on December 31, 2021.