Yami Gautam and Vikrant Massey's romantic comedy Ginny Weds Sunny has dropped on Netflix. Yami does will with romantic comedies. Don't you think? She was awesome in Bala. While the public review of the film might have been fine, the words from the critics are not so kind. 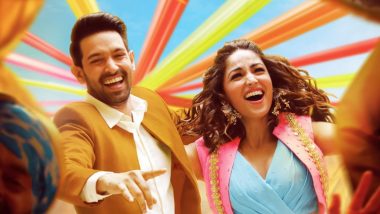 Yami Gautam and Vikrant Massey's romantic comedy Ginny Weds Sunny has dropped on Netflix. Yami does will with romantic comedies. Don't you think? She was awesome in Bala. While the public review of the film might have been fine, the words from the critics are not so kind. Directed by Puneet Khanna, the movie skipped a theatrical release amid the pandemic. The movie follows Vikrant's Sunny whose arranged marriage proposal is turned down by Yami's Ginny. Sunny teams up with Ginny's mother to win the bride-to-be over. Here's what the critics are saying about the film. Yami Gautam Talks About Bhabiji Ghar Par Hain, Says 'Show Has Some Fine Actors and Very Funny Content'.

Hindustan Times called the movie a long TikTok video. "It’s a bafflingly bad movie, tonally inconsistent to the point where scenes can transition from broad comedy involving paneer to sappy Ekta Kapoor drama, with a Jubin Nautiyal song playing in the background. Certain ‘twists’ are so nutty that you begin to wonder if they were put together by Kapil Sharma’s writing team, at gunpoint," Rohan Naahar wrote.

News18's Antara Kashyap suggested that the movie can be watched for Yami Gautam's outfits. "Ginny Weds Sunny is a film which would do really well if it were made in the ‘90s," Puneet wrote. "There is a term called secondhand embarrassment, and I have felt it multiple times while watching the films."

India Times' Renuka Vyavahare wrote, "Ginny Weds Sunny doesn’t offer an interesting take on arranged marriages, nor is it a quirky love triangle with a twist. The most appealing thing in this movie are the mouthwatering garam samosas that are served to one and all. Sadly, the film is not a samosa but a diet wala confused chivda, low on salt."

Sangeetha Devi Dundoo, for The Hindu, wrote, "Most wedding rom-coms may not aim to create a lasting impression but try to entertain you while it lasts. But Ginny Weds Sunny felt long and tiresome even with its 125-minute duration." Ginny Weds Sunny Movie Review: Vikrant Massey’s Comic Flair Makes This Tired Netflix Romcom With Yami Gautam Watchable.

LatestLY's in-house film critic, Sreeju Sudhakaran, wrote, "Ginny Weds Sunny is watchable only to see Massey get to do stuff Bollywood-y and do a fantastic job at that. Otherwise, the rom-com goes through the same motions that we have seen in similar films. Ginny Weds Sunny is streaming on Netflix."

Well, as for all weddings...you cannot make all guests happy.

(The above story first appeared on LatestLY on Oct 09, 2020 10:26 PM IST. For more news and updates on politics, world, sports, entertainment and lifestyle, log on to our website latestly.com).