Today, it was announced that Kartik Aaryan has been removed from Karan Johar's Dostana 2 for certain reasons. While Dharma did confirm that they are looking for a replacement, they did not tell the reason behind this decision. 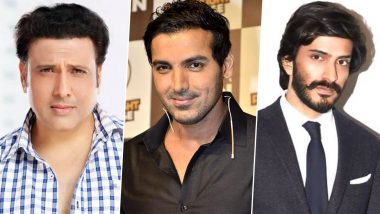 We have often seen actor getting sacked from films for different reasons. Today, it was announced that Kartik Aaryan has been removed from Karan Johar's Dostana 2 for certain reasons. While Dharma did confirm that they are looking for a replacement, they did not tell the reason behind this decision. It is being said that Kartik has been removed from the film due to unprofessionalism. He was not giving his dates to the film and had creative differences with the makers. This led to Karan take the step and sack him from the project. Dostana 2: After Rumours of Kartik Aaryan's Removal, Dharma Productions Releases Statement Confirming Recasting.

It is also being said that Karan and his banner have decided never to work with the actor again. This sure comes as a shocker for his fans, who think it was not Aaryan's unprofessional behaviours but nepotism, due to which Johar removed him from the film. Interestingly, this is not the first time an actor has been removed from a film for a strange reason. In the past actors like Govinda, Sushant Singh Rajput, Harshvardhan Kapoor have also been removed from films for different reasons. Check out our list of celebs who have been replaced before:

Sushant Singh Rajput was supposed to star in Romeo Akbar Walter. The makers had even released the official posters of the film starring SSR, but was later replaced by John Abraham. The 2019 action-drama revolving around the life of a spy was directed by Robby Grewal. Sushant was preoccupied with other projects like Drive and Raabta and was replaced.

Andhadhun is considered to be one of the best film of Ayushamnn Khurrana's but did you know he's not the first choice for the film. The film was earlier offered to Harshvardhan Kapoor, who walked out of the project because of creative differences with director Sriram Raghvan. Kapoor reportedly did not want to attend the workshops that Raghvan insisted on.

Paltan was a 2018 war action that starred Jackie Shroff, Sonu Sood, Harshvardhan Rane, Ronit Roy, Esha Gupta. However, Abhishek Bachchan was supposed to be a part of it initally but he left the project just before the movie went on to the shooting floor.

Randeep Hooda very eagerly wanted to work on Kesari, but the film eventually went to Akshay Kumar. Almost fifty per cent sequence of the film were shot with Hooda when the distributors walked out. The film got shelved and was revived with Akshay in the lead. Did Kartik Aaryan Replace Virat Kohli as the Face of Manyavar?

Yes, this successful film of Shahid was initially offered to Arjun Kapoor. While Arjun was supposed to play the titular role in Kabir Singh, Sandeep Reddy Vanga was keen on casting Shahid in the lead role. Vanga knew the actor from beforehand and felt it was only right to let him play this role. Arjun, hence, backed off the project.

Now with Kartik out of the picture, we wonder who will take his place. The actor had already shot for a few portions of the film, so the new actor will have to shoot for those scenes as well. We cannot wait to see who will replace Kartik for Dostana 2.

(The above story first appeared on LatestLY on Apr 17, 2021 08:45 AM IST. For more news and updates on politics, world, sports, entertainment and lifestyle, log on to our website latestly.com).