Amitabh Bachchan has won fifteen Filmfare Awards and is the most nominated performer in any major acting category at Filmfare, with 41 nominations overall. On Amitabh Bachchan's 79th birthday let's take a look at every upcoming film of Bollywood's megastar. 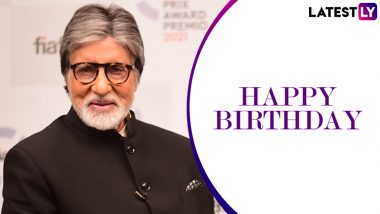 Bollywood's megastar Amitabh Bachchan is 79 years young now and the actor is definitely ging like a fine wine and working relentlessly even at this age. Whether it comes to hosting the popular reality quiz show Kaun Banega Crorepati 13 or shooting for upcoming projects, despite this tight schedule. Big B is the only actor with so many projects under his kitty and yet he doesn't fail to impress us. Big B delivered a solid performance in Rumi Jaffery's Chehre which was his last release and fans are eagerly waiting for megastar's upcoming film Brahmastra starring Alia Bhatt and Ranbir Kapoor. Kaun Banega Crorepati 13: Amitabh Bachchan Looks Super Cool as He Sports Green Shoes on the Sets of His Quiz Show.

The 102 Not Out actor has top honours to his name, this includes four National Film Awards as Best Actor, the prestigious Dadasaheb Phalke Award as lifetime achievement award and many awards at international film festivals and award ceremonies. He has won fifteen Filmfare Awards and is the most nominated performer in any major acting category at Filmfare, with 41 nominations overall. On Amitabh Bachchan's 79th birthday let's take a look at every upcoming film of Bollywood's megastar.

Big announcement on Guru Purnima 2021, Prabhas Deepika Padukone and Amitabh Bachchan to share the screen in a film. This is Prabhas' 25th film. Oonchai: Anupam Kher Off to Shoot Sooraj Barjatya’s Next Featuring Amitabh Bachchan, Danny Denzongpa and Boman Irani.

Amitabh Bachchan will be seen in a never seen before avatar of a motivational football coach in Sairat fame Nagraj Manjule's film Jhund. It will be interesting to see whether the makers opt for an OTT or a theatrical release for the movie.

Amitabh Bachchan to star in Ajay Devgn's aviation thriller and the movie MayDay is all set to release on April 29, 2022. The film is to be directed and backed by Ajay Devgn.

Big B is a part of Ayan Mukerji's fantasy adventure Brahmastra which is a trilogy announced by the filmmaker. This is Amitabh Bachchan's most anticipated film and also stars Ranbir Kapoor, Alia Bhatt,  Nagarjuna, Shah Rukh and Dimple Kapadia in major roles. The release date of the movie is yet to be announced.

Amitabh Bachchan and Deepika Padukone to reunite after Piku for the Hindi remake of The Intern. Big B was not a part of the project earlier but will now play the role which was given to the late legend Rishi Kapoor.

Fans are excited for Big B's upcoming projects and so are we! We want the Bollywood star to keep mesmerize the moviegoers through his films. Happy Birthday, Big B!

(The above story first appeared on LatestLY on Oct 11, 2021 08:21 AM IST. For more news and updates on politics, world, sports, entertainment and lifestyle, log on to our website latestly.com).