Cinematographer-turned-director Laxman Utekar says while his upcoming film “Mimi” is almost complete, the team is yet to shoot one song and finish the post-production work, which may result in some delay in release of the movie. 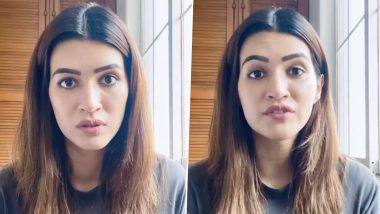 Cinematographer-turned-director Laxman Utekar says while his upcoming film “Mimi” is almost complete, the team is yet to shoot one song and finish the post-production work, which may result in some delay in release of the movie. The film, featuring Kriti Sanon, is inspired by Samruddhi Porey-directed movie "Mala Aai Vhaaychya", which won the National Award for best feature film in Marathi in 2011. “We have one introductory song left to be shot with Kriti. We have actors from the UK as part of the song and we won't be able to shoot the song till the time the international flights are inactive,” Utekar told PTI. Kriti Sanon on Essaying a Surrogate Mother in Mimi: ‘It Was Process of Self-Discovery’

The director said considering the scale of the song, it is not possible to film an at-home version. “We have shot almost the entire film with the actors from the UK, only a song is left. They are there in the whole film. We haven't thought of any alternative. We will wait and see what happens. “We can't do it at home. It is a big song with several dancers. Once the lockdown is lifted we will follow preventive measures. We will do whatever is necessary for everyone's safety. But we won't compromise on the quality of our remaining work.” Utekar added that no work is happening on the film currently as all the studios are shut. Kriti Sanon’s Heavily Pregnant Look From Mimi Leaked! (View Pic)

“We finished shooting on March 5 and were supposed to start editing from March 10 or 15. We edited for a few days and then this lockdown was announced. Edit work, music, post-production and a song is left.” Produced by Dinesh Vijan, "Mimi" was scheduled to hit the theatres in July, but the director said they will now have to postpone the release. “We don't have a clear picture about when we will be able to shoot the song, when the post-production will begin. The release date will be pushed for sure.”

When asked if the team is thinking of a digital release, Utekar said, “No, not yet because the film is not ready.” "Mimi" marks the second collaboration of the trio of Kriti, actor Pankaj Tripathi and the director, after last year's "Luka Chuppi". The upcoming film also features actors Manoj Pahwa, Supriya Pathak, and Sai Tamhankar.