Pathan: Did a Fight Break Out Between Siddharth Anand and His Assistant on The Sets of Shah Rukh Khan-Deepika Padukone Starrer?

The source further stated that the assistant kept bad-mouthing him to other workers on the set and when the director learned about the same and was very furious. 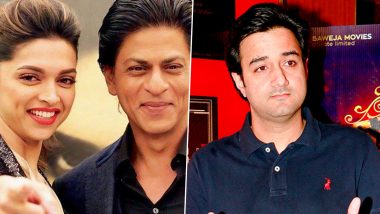 Pathan marks Shah Rukh Khan returns to the screen after a supposed sabbatical and the fans are excited to see the superstar after the long break. The film will also mark SRK's fourth collaboration with Deepika Padukone and the crew has been busy with the shoots of the film currently. Everything was running smoothly until a supposed fight broke on the sets and an agitated assistant director slapped the director of the film, Siddharth Anand after a small argument. Pathan: Dimple Kapadia To Play The Role Of A RAW Agent In Shah Rukh Khan Starrer?

A source close to the development told Bollywood Hungama, "Siddharth is known for having a certain temperament on the sets. Given that he's the captain of the ship, he didn't like how a particular assistant was behaving during work. He also wanted all phones to be kept away but the assistant didn't pay heed to any of his requests. He followed the behaviour for some time and then confronted him. That led to a big argument but people thought it was just that. Shooting resumed post that break."

The source further stated that the assistant kept bad-mouthing him to other workers on the set and when the director learned about the same and was very furious. He slapped him after this incident and huge chaos on the sets and shooting had to be stalled for the day. The source added, "The team headed for shoot the immediate next day at YRF, and the assistant was fired from the job. However, another source told that this was not the case.

A trade source gives us the accurate information of the incident that happened saying, “The report that director Siddharth Anand and an assistant director got into a fight is absolutely baseless and untrue. Sid and his team share a bond beyond years and they all look up to him as their big brother. The truth of the matter is that a light-man was slightly injured while doing his job and he was being tended to." Not Only Salman Khan but Hrithik Roshan to Also Have a Cameo in Shah Rukh Khan Starrer Pathan?

They went on to say, "Thankfully, it wasn’t serious. But a junior artist was taking a video of the incident with an ulterior motive to circulate it. Siddharth Anand first instructed the said person to not to do the same as it was highly insensitive. However, he was slyly trying to do the same again. That’s when the director, as the leader of the team, sternly asked him to hand over his mobile phone and exit the set."

The source concluded by saying, "Sid was upset that someone can be so insensitive. The junior artist, however, tried to became aggressive and the security immediately escorted him out of the sets. That’s the plain truth. Nobody got physical on the sets and there CERTAINLY was no slapping. It is utterly incorrect.” Pathan, helmed by Siddharth Anand will also feature in the lead. Produced under the banner of Yash Raj Films, the latter would be seen as the antagonist.

(The above story first appeared on LatestLY on Jan 20, 2021 06:17 PM IST. For more news and updates on politics, world, sports, entertainment and lifestyle, log on to our website latestly.com).