Not Only Salman Khan but Hrithik Roshan to Also Have a Cameo in Shah Rukh Khan Starrer Pathan?

Aditya Chopra at YRF wants to make a universe of agents with Salman Khan, Katrina Kaif, Hrithik Roshan, Shah Rukh Khan, and Deepika Padukone so we think Hrithik and Salman's entry in Pathan might be happening anyway. 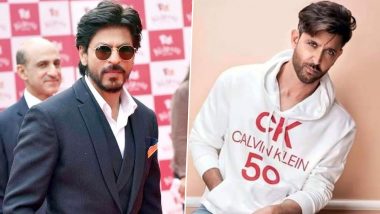 Shah Rukh Khan starrer Pathan is one of the most anticipated projects currently. Not only does it mark Shah Rukh Khan's first film after his supposed sabbatical but also reunites him with Deepika Padukone. The film will also have John Abraham essay the role of the antagonist while SRK and DP will essay the roles of special agents in the YRF backed action espionage thriller. But that's not it. Salman Khan and Hrithik Roshan too are said to be a part of it. Fans of Salman Khan and Shah Rukh Khan Engage in Twitter War as to Who is the Bigger National Hero.

While Salman Khan's cameo has already been talked about in the news, new reports suggest that Hrithik Roshan too will have a special role in the film.  Contrary to the news reports earlier that said SRK will be making a cameo appearance in War sequel, it is being now reported that director Siddharth Anand wants Hrithik to feature in Pathan as Kabir and has requested YRF to make it possible.

Aditya Chopra at YRF wants to make a universe of agents with Salman Khan, Katrina Kaif, Hrithik Roshan, Shah Rukh Khan, and Deepika Padukone so we think Hrithik and Salman's entry in Pathan might be happening anyway. A source close to the development told Bollywood Hungama, "Not just Salman, with Pathan, Aditya Chopra wants to unveil the entire special agent universe he's trying to create." Salman Khan, Shah Rukh Khan to Be a Part of Hrithik Roshan’s War Sequel?

"Siddharth Anand who directed WAR last year has also requested Hrithik Roshan to step in as Kabir for Pathan. If all goes well, we will see not only two but three Bollywood superstars together in Pathan and this will mark the first union in the entire universe. Going ahead, the three actors SRK, Salman and Hrithik will be seen making appearances in each other's franchises and thereby culminating in a big finale as well. The idea is to create an Avengers set up with spies."

Hrithik has been informed about the same and the makers are waiting for him to respond to it. The source told that Siddharth and Aditya took this decision because they felt this could be the starting point of the big universe they have envisioned. Hrithik "will most likely do it" according to the source.

After Pathan which is said to be a huge budget film, Aditya Chopra will shift his focus on Salman Khan's Tiger Zinda Hai 3 and Hrithik Roshan's WAR 2.

(The above story first appeared on LatestLY on Dec 18, 2020 04:30 PM IST. For more news and updates on politics, world, sports, entertainment and lifestyle, log on to our website latestly.com).