The two are showing off their fit bodies as they fight zombies in the advertisement. They fight the apocalyptic situation in full action and grab the bottle they were after. 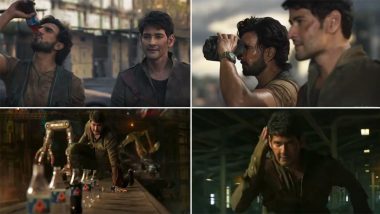 Ranveer Singh and Mahesh Babu have been teasing their fans with the teaser and promotional videos of their first collaboration since yesterday. People were eagerly waiting to see what the two handsome hunks were up to, to an extent that the two were trending on the internet all day yesterday. The suspense is finally over and Ranveer and Mahesh's advertisement is now going viral amongst the fans. Ranveer Singh and Mahesh Babu's Bromance After Shooting For A Commercial Is Endearing.

The two are showing off their fit bodies as they fight zombies in the advertisement. Ranveer and Mahesh Babu are standing in a dilapidated building and discussing how they are the only two men left on earth. Ranveer says they would find other people, if there are any, in the manufacturing unit of the brand. When they reach the place, they find it full of zombies. They fight the apocalyptic situation in full action and grab the bottle they were after.

Their fans were impressed by the advertisement and dropped several comments on the post uploaded by the actors. One user wrote, "Two biggest stars together," while another said, "Baba you look HAWT In this ad! Give us a film with the same look." Fans also gushed over the fact that Mahesh Babu was looking dapper in the advertisement. The ad gives you an adrenaline rush and makes you wish that Mahesh Babu and Ranveer Singh do an action film in the coming future. Sarileru Neekevvaru Star Mahesh Babu to Make His Bollywood Debut in a Film Starring Ranveer Singh?

This power-packed duo is about to strike with full force. Watch them as they take control. #LastMenStanding@RanveerOfficial @urstrulyMahesh

Earlier, posting a BTS picture with Mahesh Babu from the sets of their commercial shoot, Ranveer Singh wrote: "One of the finest gentlemen I have had the privilege to collaborate with. Our interactions are always enriching. Love and respect to big brother, Mahesh Garu." Reacting to Ranveer's post, Mahesh Babu said: "It was great working with you brother Ranveer. The feeling is mutual."

Apart from this, on the work front, Ranveer Singh will be seen in '83 next. He also has YRF's Jayeshbhai Jordaar in his kitty. Singh is also a part of Karan Johar's magnum opus Takht which also stars Alia Bhatt, Kareena Kapoor Khan, Anil Kapoor, Janhvi Kapoor, Vicky Kaushal and Bhumi Pednekar. The actor will also be seen in Rohit Shetty's Cirkus. As for Mahesh Babu, he recently announced his next production film Major starring Adivi Sesh.

(The above story first appeared on LatestLY on Dec 27, 2020 06:50 PM IST. For more news and updates on politics, world, sports, entertainment and lifestyle, log on to our website latestly.com).