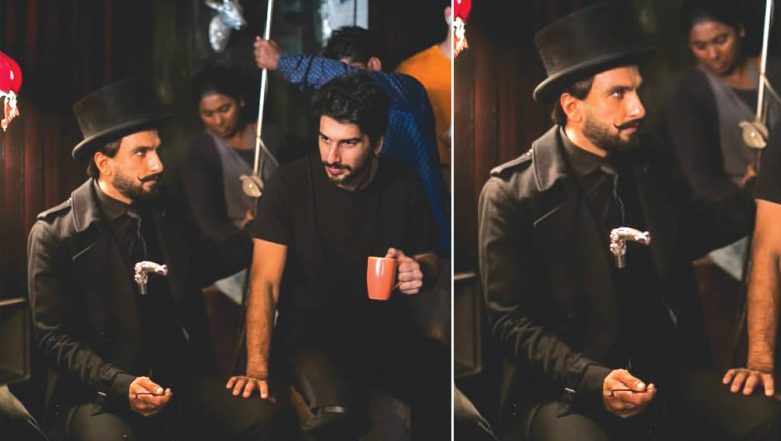 No one can pull off bizarre better than Bollywood's favourite Ranveer Singh when it comes to fashion. We have not seen a single actor in the film industry who could even think of giving Ranveer's mad sense of fashion a try. In fact, Ranveer is the only name that comes to your mind when you read or see 'Unconventional Style Statement'. And it's 'hence proved' that only Ranveer could wear anything, any colours and don it with utmost stride. Earlier today, we got our hands on a picture of the actor doing the rounds on the internet and it looks like Ranveer is all set to amuse his fans yet again with his new avatar. Chhapaak First Look! Ranveer Singh Cheers for Wife Deepika Padukone, Says ‘Proud of You Baby’ – See Pic

In the latest picture, Ranveer is spotted sporting a bizarre avatar, where he can be seen dressed in an all-black attire. While Ranveer is flaunting his spooky eyes, his beard, moustache, a cane and a round hat just  adds to his mysterious avatar. According to a report in the Times of India, Ranveer was spotted shooting for an unknown project at a suburban studio. However, there are no other details with respect to his look or the project known as yet. ‘Ek Number’: Ranveer Singh Reacts to Rohit Sharma Rapping a Gully Boy Song for His Daughter Samaira

On the professional front, Ranveer Singh is currently riding high on the success of his last release Gull Boy, which also starred Alia Bhatt and Kalki Koechlin in the lead roles. Helmed by Zoya Akhtar, the film revolved around a guy who aspires to be a rapper. The actor will next be seen in Kabir Khan's '83', a film based on the life of Kapil Dev and the iconic World Cup win of the Indian Cricket Team in 1983. Watch this space for further updates.