RIP Sushant Singh Rajput: From Rejecting his Stanford University Scholarship to Getting Inspired by Shah Rukh Khan's DDLJ, When SSR Spoke About What Inspired Him To Be An Actor

Sushant Singh Rajput in his earlier interaction had revealed how he was inclined towards academics and yet found himself ditching his scholarship to mark his journey from Patna to Mumbai. 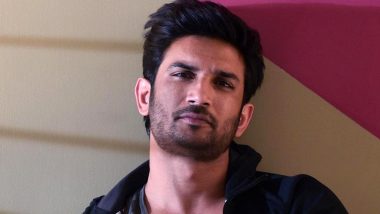 Sushant Singh Rajput's suicide was a major blow to the already grieving Bollywood. After losing its gems like Irrfan Khan, Rishi Kapoor and Wajid Khan, no one was ready to take another mighty bow in the form of SSR. While he was always academically inclined and acting was never his childhood passion, he ultimately found himself ditching the Standford University scholarship and making his way to the city of dreams, Mumbai. RIP Sushant Singh Rajput: Keerthy Suresh, Dulquer Salmaan and Other South Celebs Shocked to Hear About The Bollywood Actor’s Demise, Offer Condolence On Twitter.

Narrating details about how he arrived in Mumbai, Sushant in his earlier conversation with Hindustan Times said, "I felt the need to meet a girl, and that led me to Shiamak Davar’s group. My life went into a spin from that point on. Instead of heading to Stanford University from where I had a scholarship offer, I dropped out of college and landed in Versova, in a 1RK (room kitchen) that I shared with six others."

Crediting Shah Rukh Khan for helping him in his early days as a student, Sushant reminisced the impact DDLJ had his on his life. And mind you, it wasn't acting related. "I was a huge fan of Shah Rukh Khan. I remember watching Dilwale Dulhania Le Jayenge (DDLJ) and thinking now here’s a cool dude. He is a great performer, but that’s not what impacted me most: Shah Rukh helped me sort out my confusion about who I should be. This was in the early ’90s and the economy was just opening up – we were seeing Coke cans for the first time, international brands were coming in, and I was fascinated…yet confused. I didn’t know whether to embrace the West or be loyal to our culture. At this point came DDLJ, I was in Class VI, and Raj showed me that it was cool to have a beer, but then he also waited for Simran’s dad’s approval. There was a balance. It was the perfect marriage of an aspiring India and an India trying to hold on to its culture," he explained in his same interaction. Sushant Singh Rajput, Aged 34, Commits Suicide; Twitterati Shocked To Hear About The Death Of Bollywood Actor.

Elaborating on how he was a shy performer, Sushant also recalled the times he would dance on Kabhie Khushi Kabhi Gham song behind closed doors. "While preparing for engineering entrance exams, I’d sometimes take a break and stand in front of the mirror and lip-sync to Suraj Hua Maddham. I used to do these things but not with the ambition of becoming an actor. It was just for fun. Honestly, even if I would’ve been offered a role back then, I would’ve refused because I was a complete introvert. The lip-syncing and posing would happen only in front of the mirror, with just me in the audience," he said. Sushant Singh Rajput No More: The Actor's Last Instagram Post Was Dedicated to his Late Mother.

Sushant rose to fame as a boy-next-door in Ekta Kapoor's Pavitra Rishta. Later he took his big plunge and signed Kai Po Che with Rajkummar Rao and Amit Sadh. His last release, Chhichhore was a huge hit at the box office but this was clearly not his last release. Sushant was waiting for Dil Bechara, an official remake The Fault in our Stars to hit the screens.

(The above story first appeared on LatestLY on Jun 14, 2020 04:48 PM IST. For more news and updates on politics, world, sports, entertainment and lifestyle, log on to our website latestly.com).