Saif Ali Khan To Essay The Role Of An Idealistic Cop In Vikram Vedha Remake!

It was almost a year ago when it was confirmed that Saif Ali Khan has been roped in to step into Madhavan’s shoes for the Hindi version of Vikram Vedha. 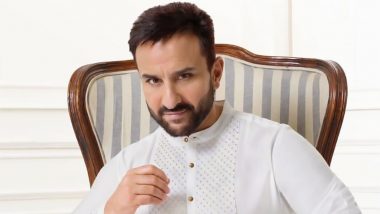 Vikram Vedha is the Tamil film, written and directed by the husband and wife duo Pushkar and Gayathri, starring R Madhavan and Vijay Sethupathi in the lead. It was almost a year ago when it was confirmed that Saif has been roped in to step into Madhavan’s shoes for the Hindi version and he would be playing the role of an idealistic cop. There is no clarity yet on which Bollywood actor has been zeroed down to play Vijay Sethupathi’s role. But rumours are rife that Hrithik Roshan is been considered to essay the role of that gangster. Hrithik Roshan Steps In After Aamir Khan Backs Out Of Vikram Vedha Remake: Reports.

In an interview with a leading tabloid, Saif Ali Khan has confirmed that he would be playing the righteous cop in Vikram Vedha remake. He was quoted as saying, “I will play an idealistic cop, so I will have to find a way to make him fun. But it will be a refreshing change to portray the good guy,” reports Mid-Day. We did Saif doing a string of grey shades and now looks like the actor is all set to play a different character. Saif Ali Khan CONFIRMS Being a Part of Vikram Vedha Remake.

(The above story first appeared on LatestLY on Jan 20, 2021 08:25 AM IST. For more news and updates on politics, world, sports, entertainment and lifestyle, log on to our website latestly.com).