Salman Khan in Talks for His Own Bigg Boss, To Turn His Lockdown Diaries at Farmhouse Into a Series? (Deets Inside)

Is Salman Khan all set to entertain his fans with a mini Bigg Bosss straight from his Panvel farmhouse? Read on. 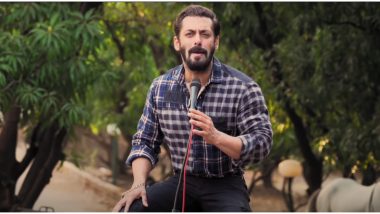 Bollywood superstar, Salman Khan is having the best time of his life. As the actor is currently spending his lockdown time with his near and dear ones at his Panvel farmhouse. This quarantine time for the actor has proved beneficial and how. As from launching his own youtube channel, releasing two hit songs to even entering the grooming space with 'FRSH', the Bhaijaan has been quite creative these days. And looks like he is all set to add one more feather to his hat. As according to a report, the Bharat actor is in talks with Colors TV for his personal Bigg Boss based on the time he is spending at his Panvel Farmhouse. Yep, you are reading that right! Salman Khan To Shoot Bigg Boss 14 Announcement Promo From Panvel Farmhouse, Show Postponed Because of Khatron Ke Khiladi 10 (Deets Inside).

As per Mid-day, the Bollywood actor has his mind on developing a mini-series just like the reality show Bigg Boss. This one will showcase how the star and the other members of his fam spent their entire day at the farmhouse. This idea really looks interesting as who would deny to watch Salman's day to day activities amid the lockdown.

“The footage will show how the coterie spent their days, their weekly treks together and their candid interviews. It will also focus on how Salman and his friends made the three music video," the source adds.

While talks with the top-notches from Colors TV is underway, apparently Sallu has already given orders to his team at SK TV to edit the raw footages of his time at Panvel farmhouse. "Bigg Boss could be delayed due to the current crisis. In such a case, this could be the perfect weekend watch," concludes the source. Stay tuned!

(The above story first appeared on LatestLY on Jun 16, 2020 05:32 PM IST. For more news and updates on politics, world, sports, entertainment and lifestyle, log on to our website latestly.com).